The Oddest Thing - A Bird Sleeping IN a Leaf

Late yesterday, I saw an odd clump in a tree just off the north side of our porch...as I moved closer, I saw a leaf hanging off a branch, with something more under it...I suddenly realized it was a Tufted Titmouse (I could tell from the coloring on the side of it's breast) hiding in a curled up leaf that was still dangling from it's branch. I was really taken aback...I've never seen a bird do anything like this! 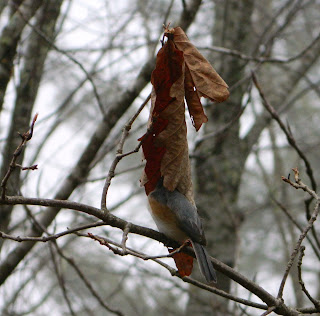 It looks like his head was turned toward the back of the leaf, but I couldn't get myself into a position on the porch where I could see inside the "hut".  And it was too high off the ground to see anything from there.  It reminded me of toddler's putting their hands in front of their eyes, playing peek-a-boo and thinking you can't see them.  Did this fellow just find what he thought was a perfect resting place?  I suppose anything climbing up the tree or on a branch would create enough vibration to wake this guy.  But he sure wasn't protected from the rain.  I don't know how long he stayed there, but he was there at least a few hours from the time I saw it...once it was completely dark, I went to see if I could see him, but it was too dark, and I decided not to use a flashlight to be sure I wouldn't disturb him. 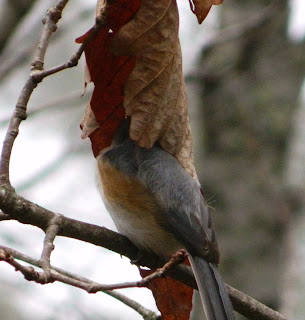 This morning, the little fellow was gone. 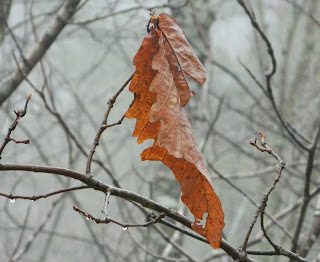 I wonder where he went...I wonder if he'll be back...such a curiosity and totally fascinating!  He hasn't returned as of yet...I'll be sure to let you know if he does.

We have a heavy fog rolling in now...no mountain view tonight! 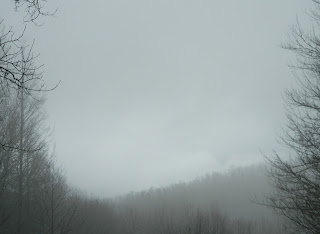 Thanks for reading my blog, you are the best f/f/r/s/f's, see you tomorrow,
Lise
Posted by Lise at 4:10 PM

Now that is a rare photo.. Maybe he's waiting for spring.. Hope all is well with you.. I've been so busy lately that I figured everyone thinks I've forgot them.. So sorry..Susie

I thought so too Susie! And no worries, I'm glad you stop by when you can:)