I was thrilled this morning when there were snow flurries.  I do realize this is not a good thing for the apple and chestnut trees, nor the raspberry, gooseberry and blueberry bushes (blueberries already got hit with the freeze earlier this month).  But I love snow.  Now mind you, we are talking flurries of snow flurries...meaning you could almost count the snowflakes as they blew by; and I do mean blew, being the wind was, and still is gusting madly.  Anyway, I took pictures until I could capture just the right one to share my snow flurry joy with you, and woo hoo, my efforts paid off and here you are.

If you look very closely, you will see dot of snow a little left of center. 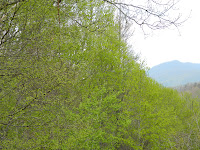 Here, I cropped the photo so you could see it a little more clearly. 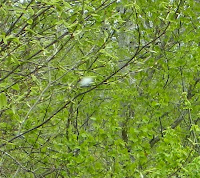 Then I cropped even more to capture the motion. 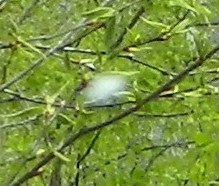 SNOW FLAKE!!!
Yes, yes, I realize it is only one lone snow flake, there were others!  Really!  But this one is special.
So what better meal on a snowy, blustery day (an exaggeration, but share the snow flurry joy with me), than Lise's Log Cabin Pot Roast.  This is my own recipe, developed from ideas collected from different resources (The old Fannie Farmer Cookbook is awesome!), including my own kitchen knowledge, to create my own, unique meal.  This is my favorite way to cook.  Another thing to be aware of, I am a little-bit-of-this-little-bit-of-that kind of cook, so my measurements in the following recipe are approximations of what I believe them to be.  I could write "or so" after each measurement, but I would get tired of writing that, I think you will appreciate my approach:).
Lise's Log Cabin Pot Roast
2 - 4 lb. chuck roast
4 tablespoons of flour
salt & pepper
1/2 cup red wine (one you would drink), then more as cooking (1 - 2 cups)
1/2 cup beef stock, then more as cooking (1 - 2 cups)
1/2 onion, diced
2 cloves garlic, minced
2 bay leaves
3 sprigs of fresh rosemary
1/2 onion, chunky chop
5 carrots, chunky chop
3 stalks celery, leaves included, chunky chop
5 potatoes, I used russet today, chunky chop (seems like a lot, but Johny loves potatoes)
1 lb fresh mushrooms, I used button because they were on sale, but would use any we could harvest if available, chunky chop
This can be a one pot meal (happiness for those of us who are the dishwasher). I am using an enamel cast iron dutch oven. Everything is accomplished in the same pot.
Preheat your oven to 325 degrees.  I use 300, high altitude makes things cook too fast at the usual temperature, usually resulting in burned food, water actually boils at a lower temperature at high altitudes.

Let your chuck roast come to room temperature, about 1/2 hour.  Salt and pepper both sides, and dredge in flour. 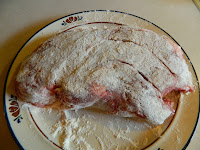 Put a little butter and olive oil in a pot, and soften your 1/2 onion.  When opaque, add your garlic.  When the garlic begins to brown, remove both from the pan. 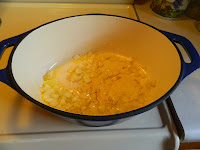 Bring the heat up on you pan, and when very hot, shake the excess flour off the roast and place into the pan.  Be careful because it will splatter.  Brown the meat on both sides.  Once browned, lift the meat a little and pour the wine and beef stock into the pot.  You want it to sizzle and get all the sticky good stuff from the bottom of the pan.  Once I have poured the liquid in, I use the meat to swoosh around the bottom of the pan to get the good stuff, not sure if this is good chef technique but it works for me.  Then put your onion/garlic mixture back into the pot.  Put the lid on and put in the oven. 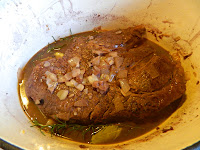 After 1 hour, turn the meat over, put some of the onions and juice on top, replace the lid and back in the oven it goes for another hour.  I actually turned the temp down to 275 because I felt it was still cooking too fast.
After cooking for 2 hours, add your veggies (hold back the mushrooms), including salt & pepper to taste (I don't use much, would rather have those condiments on the table for people to season as they choose).  When I took the pan out of the oven, I realized all the liquid had evaporated, so I added more wine and beef stock, about 2 cups total, and scraped up all the good sticky bits again. 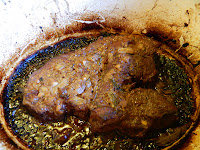 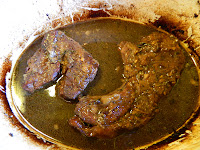 You want to remove the bay leaves and rosemary stalks (if some rosemary came off the stalks, that is OK, just leave those good seasonings in there; just be aware they will be whole and not chopped).  I put the vegetables under the meat at first, so they are in the gravy cooking for a 1/2 hour.  Remove the pot from the oven again, add your mushrooms, stir everything and put the veggies on top of the meat, and let everything finish cooking. I also increased the temperature to 325, but will check every 15 minutes to ensure nothing burns.  You will know you are done when your veggies are fork tender to your preference, I like al dente veggies, so I cook for about 45 minutes.  Take the dish out of the oven and allow it to rest about 10 minutes prior to serving. 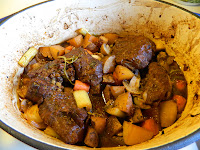 Serve with your favorite warmed bread.

One finishing option is to remove the meat and vegetables to a platter, and put the pot on the stove on medium high, and whisk/stir the remaining liquid to reduce to a gravy.  Johny and I enjoy the au jus style, just like it is, out of the pot.

A couple notes of importance after the meal...While it was delicious, and a keeper for sure, I have a few modifications...
ENJOY!  Let me know what you think of Lise's Log Cabin Pot Roast!
Posted by Lise at 7:39 PM

Lise that recipe sounds yummy. Definitely a comfort food. It was cold and very windy here in FL today so I put on a pot of corn and potato chowder. I'll be trying your recipe one day real soon.

This looks very yummy-reminds me of a recipe my mom makes-great in the cold weather.