Today I'm sharing a little about a few things in our day...

It's taken the Thistles a long time to show themselves this summer and we're happy to see them finally blooming...their stunning prickly looking pink petals are a complete contrast to the other ruffle-like flower petals that surround us...and butterflies and bees love them (though today is quite cool so the butterflies are few and far between)... 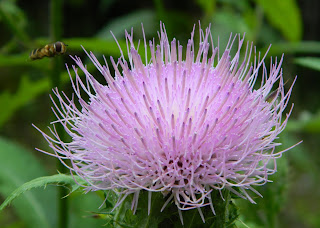 ...even the web builders seem to find the buds attractive! 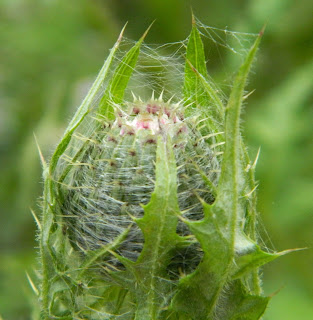 We often sit on the porch swing drinking our coffee in the morning, and despite the cool temperature, I bundled up in a few blankets (Johny's version of bundling up is long pants and a t-shirt) and enjoyed the what could be the last of mornings warm enough to not require a fire. While sitting there, I was fascinated by a Bald Faced Hornet...I heard her (I say her because the white markings on its gaster [tail section] appear to be that of a worker, which is an infertile female) buzzing about and then I heard nothing...I looked up and she was enjoying her breakfast of some type of flying insect (they prefer eating live prey to nectar), basically tearing it apart to eat the insides...I was totally captivated and had to share! 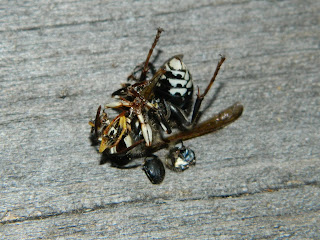 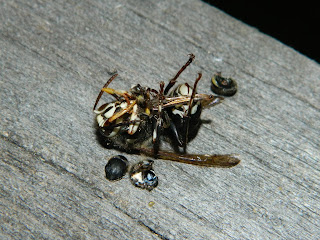 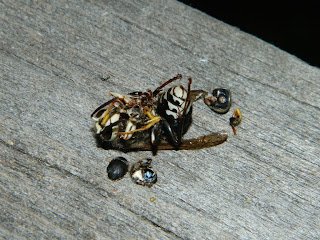 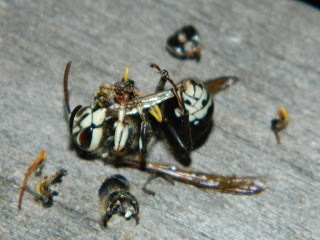 And then they were gone!  This Hornet is a mean looking creature, but as long as you don't disturb it (and you definitely don't want to do that, they are merciless if disturbed/attacked) it will leave you alone.  While I was mesmerized by her breakfast activities, I made sure I kept myself far enough away to keep myself from becoming her next target! 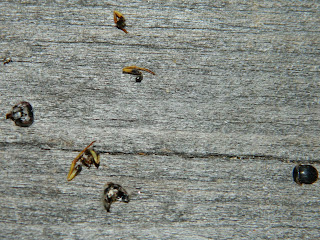 I told you about making my Crab Apple Jelly a few weeks ago, and confessed that I added twice the amount of sugar than was needed.  While the jelly is good, it's very thick and quite sweet (no surprise there...someone suggested reheating it and using it as syrup for pancakes...sounds like a good idea to me) and I had to try one more time to see what this Crab Apple Jelly would taste like if done correctly.  I've just finished jarring the new batch and I'm hopeful the final product tastes as good as it did on the spoon!  I'll let you know.  The Pyrex container has 3 cups of remaining Crab Apple juice, not sure what I'm going to do with it yet, I'll probably freeze it for now and maybe make Crab Apple-ade...what do you think? 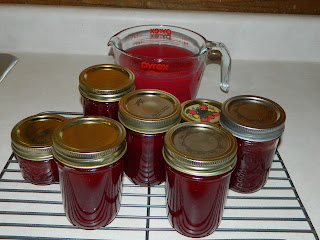 Mountain Man is currently off interviewing a few women who grew up on Pumpkintown Road and have several stories to share.   Have I ever told you he is writing a book about life on Pumpkintown, both way back when and now?  Folks around here are really interested in having these stories recorded!  I think it will be really awesome...and FYI, you pronounce this area as 'Punkintown'...I'll let you know when the book is published!

Thanks for reading my blog, you are the best f/f/r/s/f's, see you tomorrow,
Lise
Posted by Lise at 4:47 PM

Hornets, jam, book writing...what's next? Congratulations to you and Mountain Man for living your dreams! Hugs!

Thanks dad, who knows what might be next...we just keep moving forward! Hugs back:)

Love the thistles! My sis-n-law makes the best ever crab apple jelly. I bet yours will be perfect too : )

I like the crab apple jelly, but my all time favorite is violet! I got the recipe from you:)