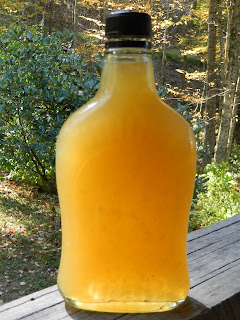 I've been fighting a bad cough since I returned to the cabin, which then worsened to include heavy chest congestion after a couple days.  The coughing was so bad it would keep me up at night (which meant a somewhat grumpy me, as I don't do well when I don't get enough sleep) and most times when I tried to talk, I would start hacking and would have to stop talking (some people might think this is a small blessing, ha ha).  I tried over the counter cough medicines, but the one I tried seemed to make it worse.

One of the people I was speaking to when interrupted by a coughing fit was my Dad.  We ended up having to discontinue our discussion, but he did say he was going to send me a cough medicine recipe that his sister Gaby had given him long ago.  I said thanks, and figured it can't be any worse than the absolutely horrible Canadian cough syrup he gave me once...Johny and I were visiting and I had a tickle in my throat.  I was going to be reading at church that morning, so I asked Dad if he had anything I could take.  He said he'd look and see.  I proceeded to take a shower and get ready to leave.  When I came into the kitchen, my Dad had already left for church, but Johny showed me the cough syrup my Dad found.  Johny kept watching me as I prepared to take a spoonful...I should have known something was up...as soon as I swallowed that stuff I yelped and sputtered and said "this is the worst thing I have ever swallowed!"...he worked hard to contain his knowing smile, and said my Dad had told him that it was awful tasting but suggested he not forewarn me, since knowing it was going to taste bad might keep me from ingesting it.  It really was horrible, but it did keep me from coughing while I read aloud!

I am happy to say, this recipe I am sharing with you today actually tastes relatively good and better yet, it works!  I took 1 tablespoon two hours ago and I have not coughed at all and my chest congestion seems to be loosening up.  Nothing like an old timer remedy!!!

Put the onion into a pot with the water and bring to a boil (I ended up dicing 1 1/4 cup of onion so I used 1 1/4 cup water).  Cover the pot and decrease the heat maintaining a slight boil (a little more than a simmer) and cook until the onion becomes soft and mushy, about 20 - 30 minutes.  During this time, use an immersion blender to get the onion as liquified as possible and then allow it to continue to cook for the remainder of the time (you could also put it in a blender or food processor after it cools a bit).  Remove from the heat but leave the cover on while it cools.

You can choose to strain all the onion out of the liquid if you prefer not to have little bits in it; I decided to put it all through a strainer, squeezing all the juice through the screen, and then taking about half of the onion and putting it back in the liquid (the rest went into my compost pot).

Now add the lemon, honey and whiskey/brandy.  Mix well and put into a glass container for storing in the refrigerator; you can warm it for 10 seconds in the microwave prior to taking it if you prefer to swallow warm syrup (I do).  You can take 1 tablespoon as needed.

There you have it, a soothing butterscotch colored liquid that calms a cough...and if you mix a little more whiskey/brandy in a dose before bed, sweet dreams!  (You can make this cough remedy without alcohol, though it contributes to the calming effect.) 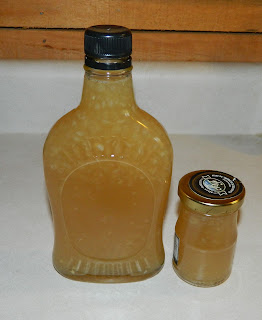 Thanks for reading my blog, you are the best f/f/r/s/f's, see you tomorrow,
Lise
Posted by Lise at 5:28 PM

Great job at turning my notes into a real recipe. Can't wait to share it with Gaby! Glad it's working. Hugs!

Working like a charm dad, I slept all night through and have hardly coughed this morning!