A Leisurely Drive Along the Blue Ridge

We made a last minute decision yesterday and went for a leisurely ride along the Blue Ridge Parkway...we drove from Balsam Gap to the Oconaluftee Visitor Center which is the end of the Parkway.  We thought we might catch the end of the season for Fall colors, that that we did...though the bright colors have morphed into deeper earthy tones, the views were still spectacular. 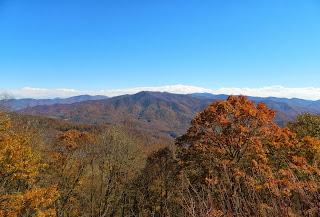 We decided to pass one of the overlooks because it was overgrown with trees.  As we drove on, we realized there was water on the other side...so we went on to the next overlook, turned around and went back.  It was well worth it...tucked into the woods a bit was this lovely fall... ...we decided to hike the path and see if we could find the top and after turning off onto a little travel path, we found it (we were standing at the big rock you see to the right of the falls in the photo above). 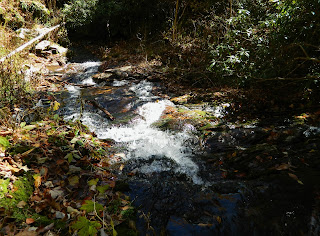 We stopped at the Waterrock Knob Visitor Center...I felt like I was at the top of the world... 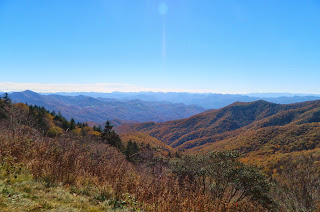 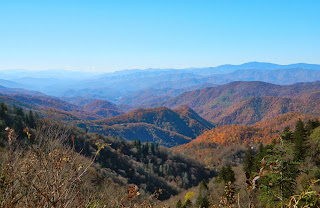 ...we walked up the trail to get the full view...it felt like straight up!...and came across a few interesting spots... 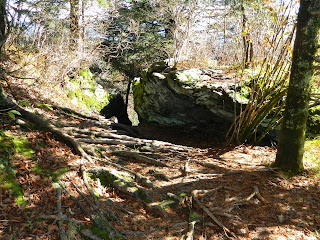 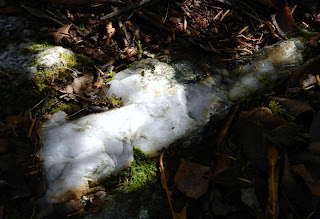 I saw a sign with what I thought was for a camping area, decided to go on an adventure and I turned onto the road leading off the Parkway (yesterday was the day for spontaneity)...there was a fork in the road and I decided to go clockwise.  It was a relatively well traveled dirt road... 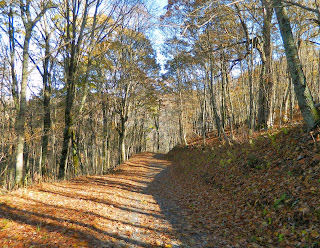 ...that wound along the mountain's edge...higher and higher, on and on... 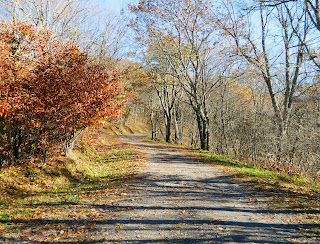 ...we came to a primitive camping sight (I can see why someone would want to camp here) and soaked in the majesty...even though we had no idea where we had actually stopped (no GPS in the car) but it the sun made it clear we were now heading in the opposite direction than on the Parkway (southerly instead of westerly... 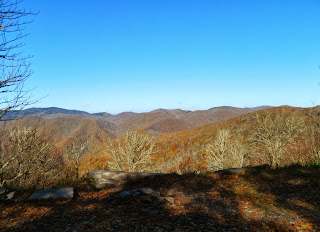 ...then we decided that since this was one of only a couple spots we came to that we could turn around, we would head back the way we came. 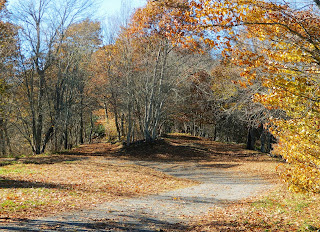 Funny, we calculated the mileage back to be only 3.1 miles one way on that road, felt like much farther than that when we just kept going.

We drove back on the Parkway, stopping at many overlooks.  As we began descending in altitude, the colors began to pop. 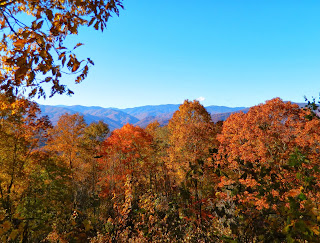 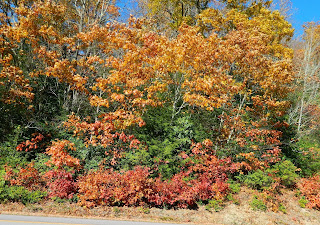 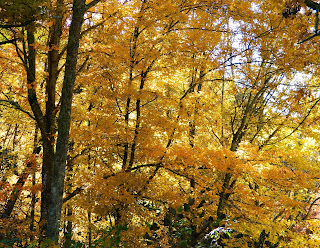 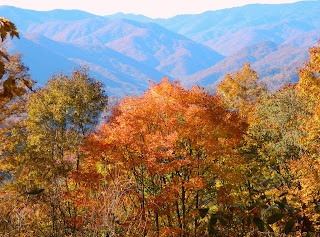 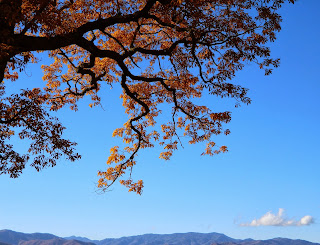 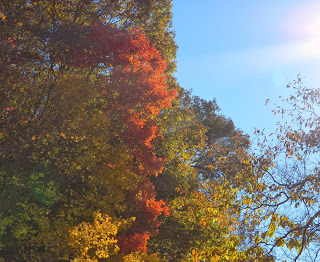 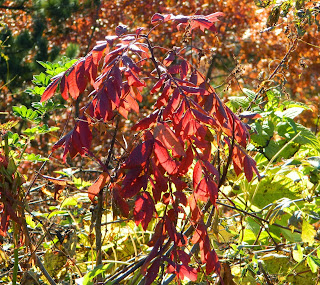 It was a great way to spend a Friday afternoon!

This is our view today...cold air rolling in, giving lots of cloud cover and making the colors seem brighter.  Soon, the trees will be bare...I love that winter look...do you? 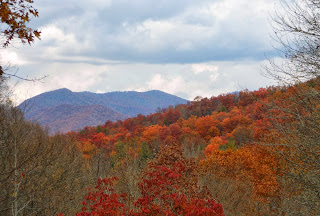 Thanks for reading my blog, you are the best f/f/r/s/f's, see you tomorrow,
Lise
Posted by Lise at 4:00 PM

Thanks for letting me ride along. What beautiful views!

Your trees are lasting a lot longer than ours. Plus, you have a lot more in one spot. We have mostly maples in scattered pockets on the hillsides. We have a spot our good friend John has named Blue Ridge. You can only get there by quad or hiking. The last portion of the trail he built mostly on his own, with a little help from his brother and friends. John loves building trails to lookout points, just because they are there. - Margy

Thanks Patti, it was a very relaxing ride:)

Margy, this morning I woke to most of the trees having had their leaves blown to the ground. Sounds like you have a lovely trail to your own Blue Ridge! We enjoy making trails through our woods and to lookout points, we also made a trail through our woods to our garden (though it's easier to walk along the road, LOL!)

Wonderful pictures! The fourth from the bottom -- the branch against the sky with the mountains in the distance -- is breathtaking!

Thanks Vicki, it's my favorite:)

Thank you for the "babbling brook" photo...I have a thing for those little creeks. My favorite photo is the branch in front of the blue sky...any piece of art. Hugs!

Thanks dad, I've had lots of compliments on that photo:) Hugs back