A few days ago I wrote about making blueberry jam...the title was Homemade Jam - It's Easy.  Well, I found out the hard way that it's not necessarily easy to make good jam and found myself in a jam with my jam!  I've been anticipating making blueberry jam with our summer blueberries, my mouth watering every time I thought about tasting the blueberry deliciousness...the day after making my jam as described in the links above, we tried it...or I should say tried to try it....we opened a jar, stuck a knife in it, and hit a jam wall...literally!  It was so thick and hard it was almost impossible to get some out of the jar...never mind spread it on toast...the knife should not stand up like this! 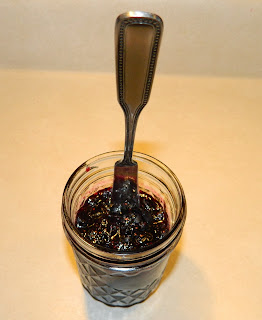 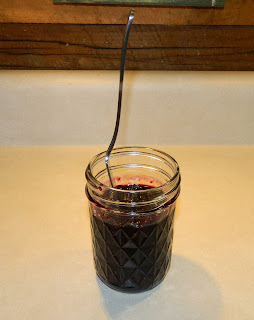 Johny persevered in scooping some out and we tried it...you know how a really sticky chewy candy sticks to your teeth?...that was my blueberry jam.  It was clear I had boiled it too long, removing too much of the liquid and leaving a sticky sugary blueberry blob...I must admit when I was pouring the jam into the jars and saw how thick it was, I wondered if something wasn't quite right; though I believed it was ready based on the spoon test, I'm not opposed to confessing I obviously don't really know what I'm looking for in the spoon test.

I was so disappointed, I just couldn't let all those berries go to waste.  I thought a lot about it, and decided that adding liquid to the sticky jam and reheating it all together should improve things.  I got confirmation on the Internet with a fix for sticky jam at the National Center for Home Food Preservation site.

I put two of the jars into a pot of just enough hot water (I used the same water I had put my clean jars into to sterilize, but turned the heat off so the water was no longer boiling) to come up the sides of the jars but with no risk of leaking into the jam so I could soften the brick (I mean jam) from the jar and get it into another pan. 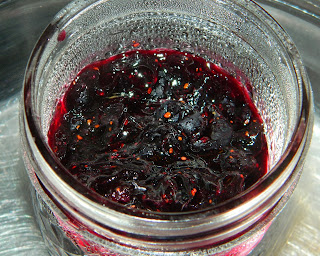 With a little help from the knife, the jam slid right out. 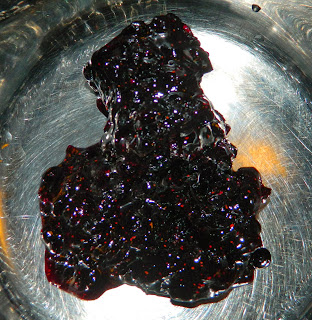 I searched for 100% blueberry juice (I wanted to keep the true blueberry flavor) but all I could find was the pomegranate/blueberry mix (there were lots of blueberry smoothie type mixes, but I wasn't willing to compromise). 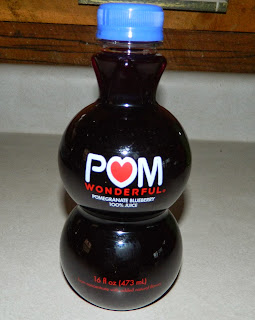 Following the suggested 4 tablespoons juice : 8 ounce jar jam ratio suggested by the  National Center for Home Food Preservation, I added 6 tablespoons of juice to the pan (I was using 1 and 1/2 8 ounce bricks...I mean jars of jam...I still had 5 jars left, but I wanted to do a test run)... 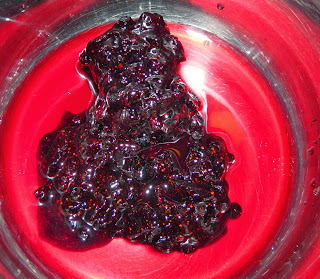 ...turned the burner on low and starting breaking up the jam and stirring constantly... 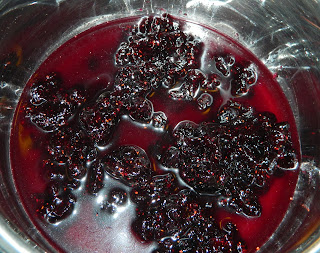 ...until everything was combined. 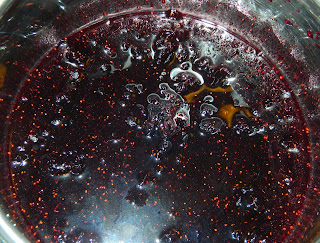 I then turned the heat to medium while continuing to stir constantly until the mixture came to a boil. 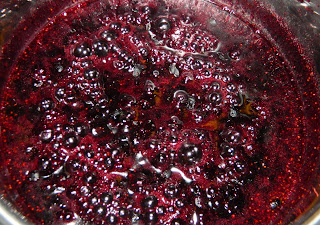 I immediately removed it from the heat and put it into the jars.  I used an old-timer approach and after putting the seals and rings on the jars, turned them upside down for 10 minutes... 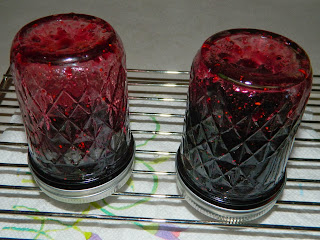 ...then turned them right side up.  It wasn't long before I heard the delightful little pop the jars make when sealing.  It is recommended to keep these jars stored in the fridge. 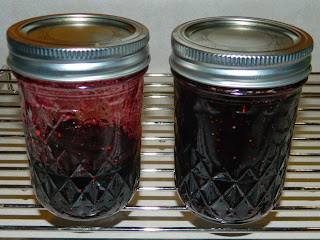 Drum roll.....it worked!  After letting the jam set overnight, I tested it...it spooned easily out of the jar and tasted like blueberry deliciousness...this calls for a big woo hoo!!! 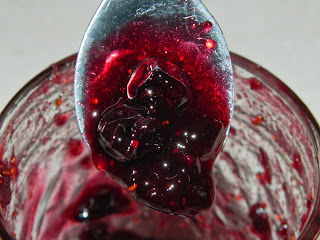 I will do the same with the other 5 jars.  For my future blueberry (and other) jam making adventures, I will not be using the spoon test to know if the jam is ready.  Instead, I'm going to use my candy thermometer; I've also learned that jam is ready at 220 degrees UNLESS you live at a high elevation, which for every 1000 feet above 1000 feet, you subtract 2 degrees from that 200, so my ready temp will be 215 degrees.  I've been pretty successful with my other jams, except the crab apple jam  I used too much sugar by mistake (the recipe in the link is correct), and my second crab apple jam attempt I made is a little thick (I'm going to use that for ham glaze)...as my friend Bertie told me, this won't be the last time something doesn't work, she's thrown many a bad batch of something away.  It will take a lot for me to throw something away...but I'm glad I've learned a few things with my blueberry jam.

I hope this sticky jam fix works for you if you ever find yourself in this position.  Do you have any other fixes?

Visit Homestead Barn Hop and A Bright and Beautiful Life for more!
Posted by Lise at 2:55 PM

BIG WOO HOO! Fixes...I've got one...bring the jam to my house for Thanksgiving! Hugs!

Maybe we should make jelly and jams together, I never get it thick enough.

Looks so yummy and this is a good time of year to make it. Hugs, xo

So glad you were able to find a fix. It's not just losing the ingredients, it's losing all the time and effort. - Margy

Have it packed dad! Hugs back:)

LOL Patti, that would be great fun!

I'm pleased to say it tastes delicious, and you are right, there is something about the smell of things cooking when it's cold outside Susie!

I agree Margy, it all is time consuming. But the end result is worth it, especially when something can be saved rather than lost:)