A Mica Mine and A Gravestone

Johny enjoys rock hounding...that is searching for gems and minerals...he's got a collection of many and searches through dirt and rubble every chance he gets.  Fortunately for us, we have several Mica mines on our mountain and many that surround us.  This is the mine nearest to our cabin, about 2 miles as the crow flies.   Looks pretty cool from a distance... 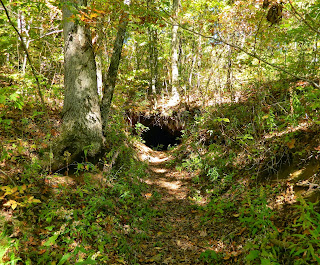 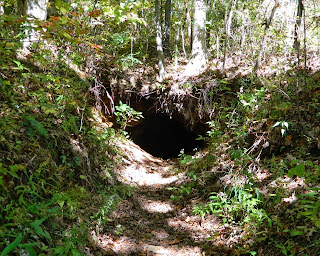 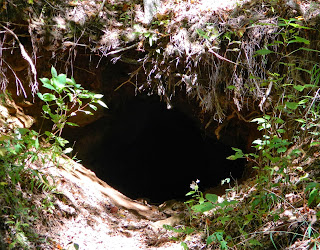 ...and even terrifying...this is as close as I will get, which is standing just at the opening of the mine...I've never been able to build up the courage to venture inside...just thinking about it is getting my heart racing. 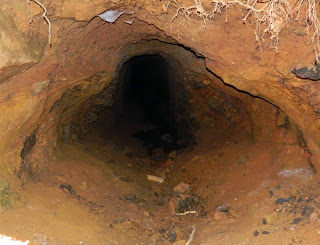 For us, the adventure is in rock hounding around the area.  Though this big quartz stone (about 24"x24") was in the woods not too far from the mine's entrance...it was quite beautiful as the sun shone on it. 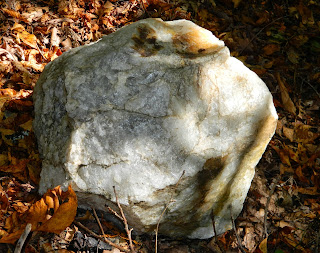 Mica (Muscovite) was initially mined to make windows in stoves and furnaces, and then as an insulator for electronics until the development of solid state electronics at which time Mica became obsolete.  It's quite pretty... 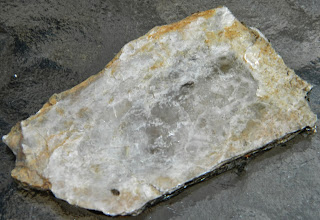 ...see the leaf under the transparent layer? 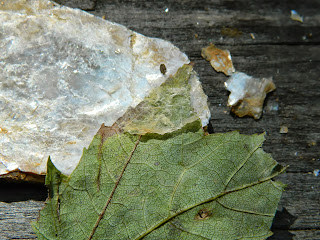 This stone has a chunk of Mica in it... 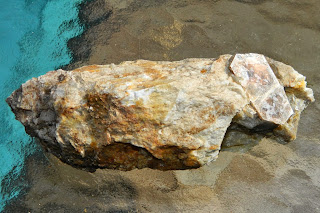 ...it's not flaky because it's still embedded in the stone... 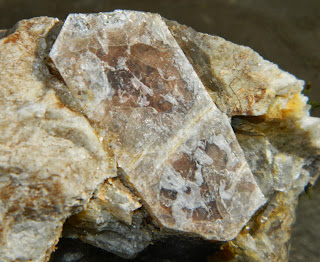 ...this is a side view of the same piece above. 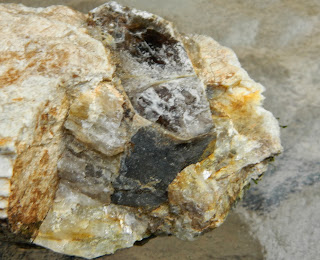 This is Biotite (to the best of our knowledge), or black Mica...you can read more about the differences here...Muscovite vs Biotite.  Johny plans on trying to release the Biotite from the rock so we can look at it more closely. 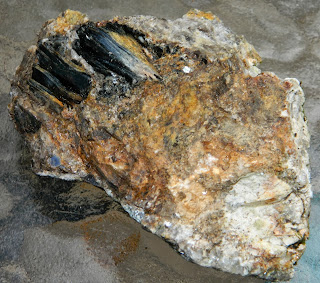 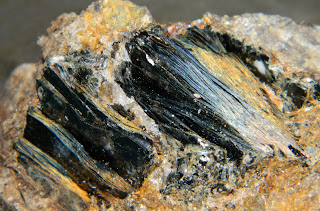 Johny found this neat stone, but we don't know what it is..do you? 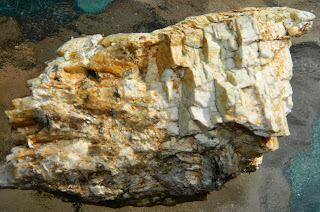 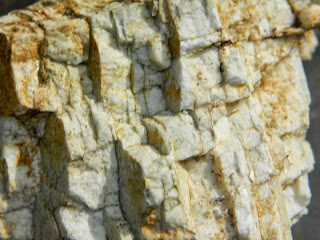 Our second adventure of the day was coming across this gravestone leaning on a tree that was near that large quartz stone above...HW Snider, Mar 4, 1877 - Apr 9, 1905...with "I have found the shore of everlasting rest" engraved on it...makes me wonder about HW Snider's life and ultimate demise, having died at the young age of 28 (the average age at death was 47 at that time). 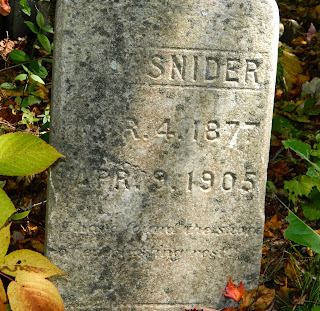 There were several other stones that appeared to have been part of the burial monument as one time.  Later, after an internet search, I discovered that there is a gravestone at the Parris Cemetery with the same name, DOB and DOD....I suppose the family moved the deceased to a different resting place...the replacement stone didn't have the above quote on it, hopefully HW Snider's found everlasting rest now. 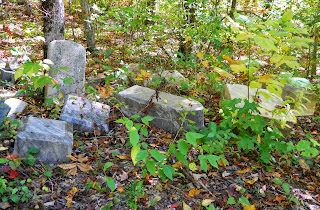 I will admit that while I was standing in this spot to take my pictures, I felt it was important to step gently and carefully...even though I later discovered it appears the remains have been moved, I'm glad I tread softly!

Thanks for reading my blog, you are the best f/f/r/s/f's, see you tomorrow,
Lise
Posted by Lise at 2:51 PM

The second biotite photo looks frameable to me. Hugs!

As a kid growing up in Colorado, one of my favorite finds was mica. It always seemed almost magical to me.
An Arkie's Musings

It is a pretty shot! Hugs back dad:)

Richard, it does have a magical quality!