I found this one inch spider when I was getting into the shower this morning...one inch doesn't sound very big except for being the one standing in the shower with it...this arachnid must have known it was a good day to scare someone.  I won't go into all the details but I will share this...I need my glasses to see, which of course were sitting on the bathroom counter because I was getting into the shower...I thought this arachnid was actually a cricket (we've had them hopping about the cabin...I guess the cooler weather is driving them indoors) and we usually catch the crickets and throw them outdoors.  I was about to pick this guy up when I realized he didn't look quite like a cricket and I better put my glasses on...you can imagine the scene when I realized it was a not so tiny spider (Johny was at a neighbors, so shouts of help would have served no purpose).  What a way to start the day...Happy Halloween! 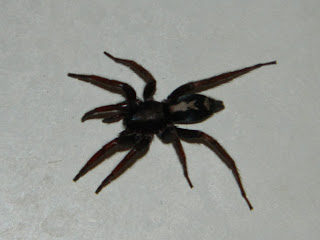 Did you know that Halloween was started by the ancient Celts, who thought the souls of the dead returned to earth to hang out with the living during the Samhain festival, which celebrated the end of summer.  It was not supposed to be spooky, rather a celebration of the departed spirits and a time for reflection.  Many years later, candlelit turnips carved with mean faces were used to frighten away the spirits...eventually, immigrants in US used the more plentiful pumpkins. 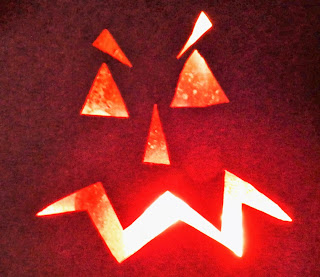 Eventually these carved pumpkins became known as "jack-o-lanterns" because pranksters would run about the streets frightening travelers along the roads with them.  Today, it's common practice to carve jack-o-lanterns and display them on Halloween...it's become quite an art form!  We don't carve a pumpkin, mostly because I want to use the pumpkin meat for cooking and pies, and no one comes up the mountain to our neck of the woods for trick-or-treating.  Do you carve a pumpkin?

Last year, snow covered the ground for Halloween,  This year we have a lovely wall of color as we look at the mountains and the skies are grey and beginning to look ominous.  Gusty winds are beginning to build, perhaps giving us good howling sounds to take us through the evening. Otherwise, it's going to be quiet around here. 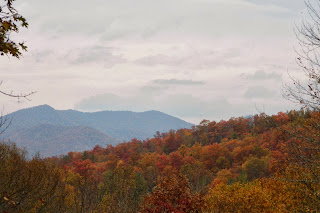 Thanks for reading my blog, you are the best f/f/r/s/f's, see you tomorrow,
Lise
Posted by Lise at 4:12 PM

We don't get any trickers (hopefully) or treaters up the lake. That is one nasty looking spider. I hope you got him out without getting a bite! When I taught school I would get a Halloween pumpkin, but decorate it cut construction paper and pins. Then for Thanksgiving, the pumpkin became the body of a turkey, for Christmas it became Santa's face, and If I got a really good pumpkin, in January it became the round structure under while tissue paper to become Mr. Snowman. By then the meat wasn't any good for eating, but the kids and I felt we got full enjoyment out of our one purchase. - Margy

Hey little Miss Muffit...you did good! We did not carve a pumpkin, but we did stick some paper/plastic ones on the front door. We gave out granola bars for treats. Hugs!

Margy, I found out that particular spider isn't really harmful, but I don't like him regardless. You've got very creative pumpkin use ideas, me, I'd rather cook it, LOL. I'm sure your students enjoyed their time with you!

LOL Dad, granola bars...kids must have looked twice at them, though I'm sure their parents were pleased:) Hugs back