Old Timer's say that the number of brown bands on the Woolly Bear caterpillar forecast how cold the winter will be...more brown, milder winter (I've written about this before, click here if you'd like to compare the caterpillars). 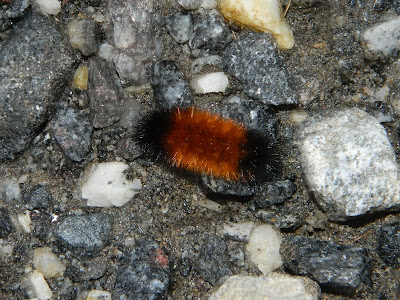 If the folklore holds true, then we are in for a mild winter...all the Woolly Bear's I've come across this season have had a significant amount of brown bands.  In fact, we found the one below in Bertie's house today...the predominance of brown and only one band of black suggests a very mild winter (I've never seen a Woolly Bear with this much brown before). 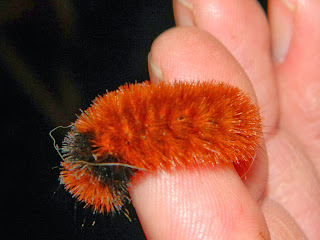 Interestingly, November's weather was quite mild today we reached 60...feels like the end of summer though it doesn't look like it.

I also read that the number of brown bands indicate the age of the caterpillar...an older Woolly Bear has more brown bands because the previous winter was mild allowing spring to begin early...last year was a relatively mild winter though it stayed quite cold late into the season.

I wonder which of the theories will hold true this year...

Thanks for reading my blog, you are the best f/f/r/s/f's, see you tomorrow,
Lise
Posted by Lise at 5:12 PM

I sure hope the wooly worms predictions hold true. I've seen several of those this year with more brown than black. Never did know this about the rings. Thanks for the great post. Hugs, xo

Us bloggers think alike, I talked about wooley worms over 5 years ago! http://osagebluffquilter.blogspot.com/2007/11/mr-woolly-worm.html

Susie, today may be the first day of feeling really wintery...I hate to say it but I'm thinking "let is snow!"

Patti, isn't it funny...such a cute little woolly worm brings so much entertainment:)

If he was all black dad, indicating a cold winter, would you still love them? Hugs back:)