Progress with the deck rail has been slow since I posted Rustic Deck Railing, Part 2...we had rain, big (yay) snow and a few design challenges along the way...so we were like turtles, slow and steady.  When I say we, I should clarify that Mountain Man is doing most of the wood working, I am more the aesthetic and design adviser...and there's a lot more wood working activity than anything else:)

A little over a week ago we had the shell of the first section completed.  Eventually, naturally growing rhododendron branches (by naturally I mean not straight) will be secured between those posts and rails making a random decorative design (they will have a skip peel finish).  Also, the flat top of each post will be whittled/carved so that the width matches the top rail. 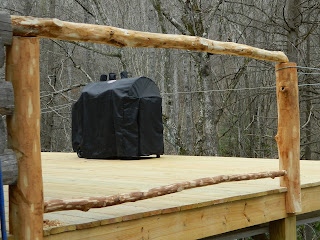 The next step was preparing the corner post for installation.  Mountain Man (Johny) used a chain saw to make the initial cuts of the triangular section that needed to come out, a chisel would be used to get deeper into the wood...because this post would be on the corner, it would be attached on two sides of the deck (little did we know how challenging this would become). 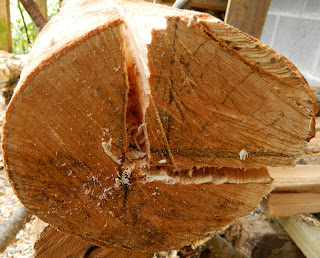 Johny used a drill to make the initial cut (like a perforated piece of paper) on the top part of the triangle (we were concerned the chain saw would cut too deeply too quickly)... 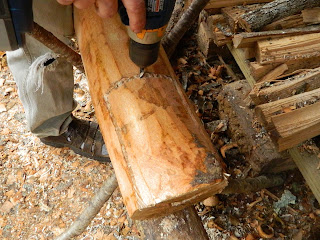 ...and then used a mallet and chisel to cut that piece (this was a very long process...chip by chip) off the log. 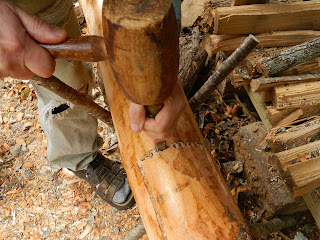 And then, without warning, while he was chiseling, we hear that crack sound you know means the wood just split...drats!  Keeping it clean here, that's not exactly what was said.  The piece had not been completely removed when it cracked, so Johny kept working slow and steady, until the piece released. 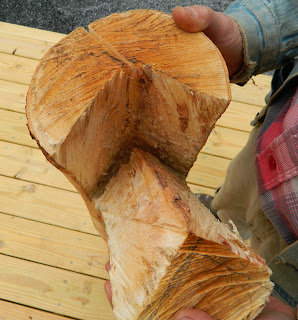 We decided we could fix that crack (after much debate about starting with a new post, which meant going on a hunt for one because we had just the right amount of post logs for the entire deck and this particular one had the largest diameter) to use a bolt to try to decrease the width of the crack, but also to secure it for the long term.  We figured that because the post would be attached with a total of 4 - 5" screws, two on each side of the deck, that this could work (worst case scenario, we'd go log hunting).  This is the crack before surgery... 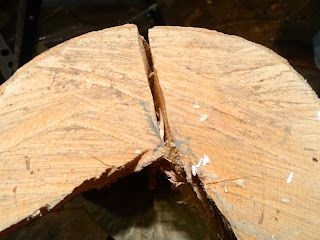 ...this is the 4" bolt inserted into pre-drilled holes... 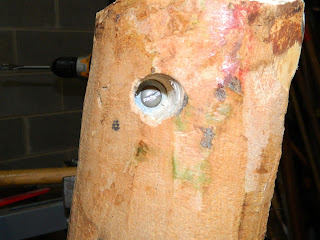 ...including washers to have a larger surface for the bolt to grip... 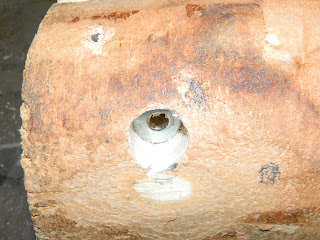 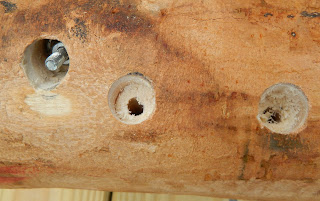 ...this is the repaired crack; yes there is still some space (once the wood separated it was not possible to get it to fit back together perfectly), but is bolted together and strong. 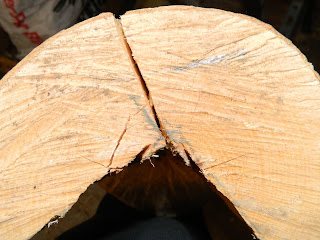 In order to install the corner post, Mountain Man prepared the post mortise for the foot rail tenon connection and inserted the foot rail with the skip peel finish to test the fit. 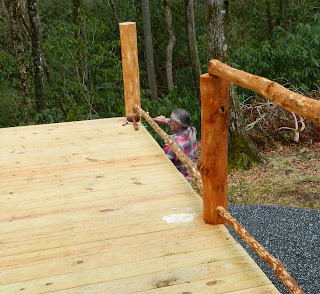 This meant a lot of maneuvering, chiseling and repositioning of the post, so it would be as close to the deck floor & girders as possible.  All this had to be done with the foot rail installed in the mortise and tenon connection on each post, leaving little wiggle room.  We also had to line up the pre-drilled screw holes, that was a challenge! 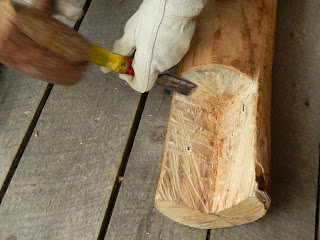 Finally, we had a match and good fit.  We used 2 - 5" screws were used on each deck girder; a total of 4 - 5" screws are holding this post up, I do believe we are safe and secure! 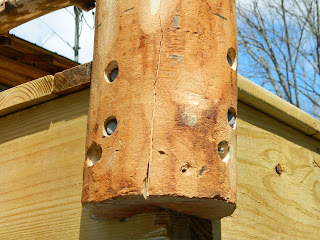 And here you have it, making progress...now we must hunt for the next hand rail! 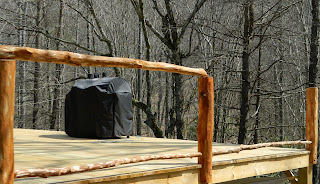 Whew!!! thanks for the 'xplain' . . . I saw that big black boxy thing and thought it was a suitcase!

Planning...patience...persistance! You've got it all! Hugs!

I second the patience.. Love the railing and sorry I missed out on the other two..Blessings .

LOL Patti, devil's in the details, right? That would be a big suitcase, which is what I tend to take when I travel...a girl can never be sure what she will need...

No troubles Susie! Thanks for visiting and blessings to you as well:)