A couple months ago, my blogging friend Tipper who writes the Blind Pig & The Acorn asked me if I would like to participate in a Sow True Seeds bean project.  She told me that Sow True Seed needs quality photos of their bean varieties and opinions about whether they should continue to sell the bean variety or not.  Of course, I said yes! 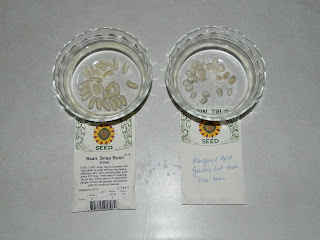 ...and I planted 24 seeds of each on June 3rd (which by the way, was not an optimal planting day according to the moon, but I was going out of town and wanted to get them in the ground...I figured this would be another good "test" of the importance of planting by the moon).  I planted both varieties in the same row, the Strike beans in the front and Greasy Cut in the back... 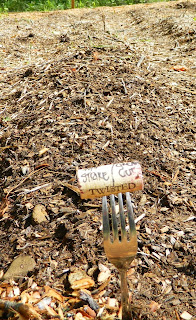 By June 30th, this is what had begun to grow.

The Strike beans were doing well, but the Greasy cut were still quite small and yellowish, which at this point I was thinking was because of all the rain...unfortunately, I forgot to take closeup pictures of the Greasy cut, so you have to use the photo above to see that they were not progressing as well as the Strike. 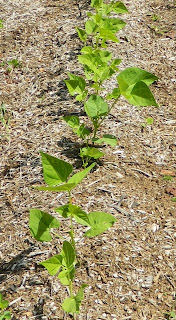 Two weeks later, the Greasy Cut were still small and yellowish, while the Strike beans continued to grow (though they not very tall)...

...and every one of the plants were full of flower buds! 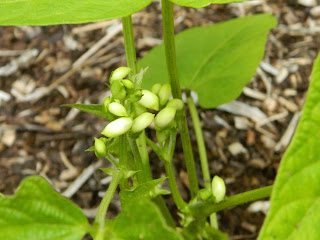 You can see the Greasy Cut beans better in this picture, comparing them to the Strike in the front, it is clear they are not prospering. 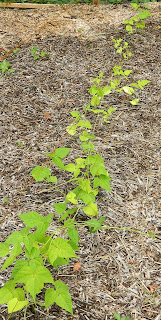 A week later, on July 21st, the Strike beans were growing!  Unfortunately, no flower buds and still not much growth with the Greasy Cut variety. 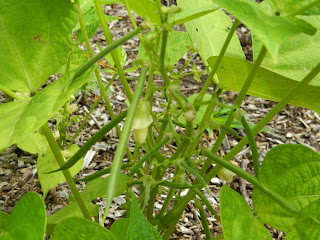 This photo shows the hole row of beans, again with the Strike growing taller, Greasy Cut struggling in the back of the row.

By July 24th the Strike beans were really looking good, with almost every bloom producing fruit... 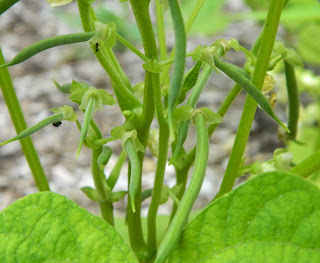 ...and climbing the the stringers we put up for them... 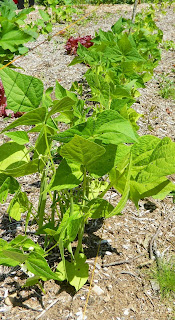 Today, only 2 days later, there are Strike beans to harvest! 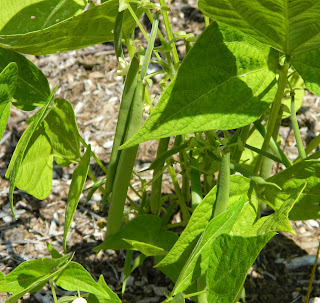 ...and the are climbing higher every day with many more beans still growing, too small to pick today.  You can see some yellowing of the leaves, but it doesn't seem to be hampering their ability to produce fruit. 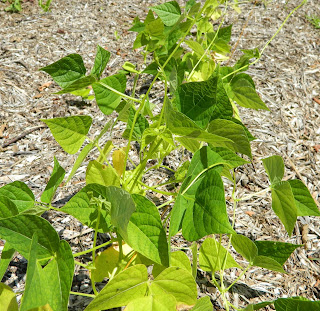 And what delicious Strike beans they are!  This is the first harvest (displayed on our primitive end table click on this link to read more about that)...beautiful, aren't they?  And so many more to harvest... 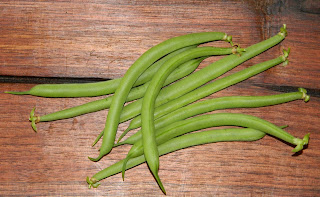 ..and look at these Strike beans up close... 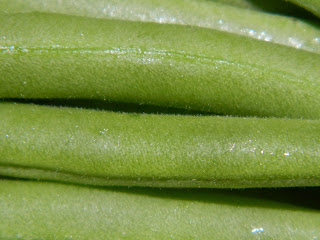 ...they look as good as they taste!  The outside has a slightly velvety feel, just like they look, but have a crispy crunch when you bite into them and sweet, juicy inside with tiny beans.  I would definitely recommend that Sow True Seeds continue with Snap Bush Bean Strike variety.

I will continue to talk sweetly to each of them, but I'm afraid the Margaret Best Greasy Cut Short Pole Beans may not have what it takes to continue as one of Sow True Seeds varieties.  If planting by the moon is having any effect here, it would be on the Greasy Cut beans...unless the Strike beans should be much taller!  I am enjoying participating in this project and let you know any further developments.  By the way, we don't use any pesticides or fertilizer beyond the horse manure we treated the soil with.

Quick update on the mushrooms we harvested yesterday...BLECH!!!  The giant polypore was tough like rubber and the Fish Milky was bitter and did not live up to Mountain Man's previous experience with it...even he didn't like them (it takes a pretty yucky tasting mushroom for that to happen).  We are planning on eating the lobster mushroom tonight (yes we went to collect more and yes I wore my jeans) and we are going to grill them...looking forward to trying that.

Thanks for reading my blog, you are the best f/f/r/s/f's (that is family/friends/readers/subscribers/follower's to those of you new to my blog), see you tomorrow,
Lise (sounds like lease)
Posted by Lise at 3:14 PM

Bean day! Yep that's what we both though yesterday. I posted my blog and then headed off to read others and saw your.

Thursday the blacksmith worked up one garden, removed pea vines and green beans bushes and tilled it. He gave Lizzie a salt shaker full up turnip seeds and she had to run through it barefooted, and shake them out. Wish I would have taken a video of it!

Have a great weekend!

Your essay on the beans reminds me of when I was a child we would harvest (take without permission) the beans from grand pere Dalpe's garden...I loved the taste of raw garden picked beans! Yummy. Hugs!

Ha ha, this makes me laugh so Patti! Brilliant minds! I did see your post, will comment shortly:) I do have to say your purple beans look amazing! And the next time I have to sow seeds, I'm trying Lizzie's way!!!

Ah, memories dad. Yes, raw garden picked beans are awesome, probably even more so when you are sneaking them as a child:)

Lise-all the photos look just great! Thank you so much for playing along with me and Sow True Seed : )