Woo hoo, very exciting update!  But before I describe the final steps of the deck prep stump removal project, I thought I'd share a couple beauties I spotted on our walk to the garden this morning, showing these first because they are much prettier than the pics of the project:).  Delightful!


I am still trying to identify this one, but it is spectacular! (I have since learned from Mamabug that this is Bee Balm, love the name!  Thanks Mamabug!) 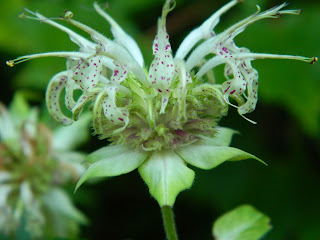 I love how bright and cheerful Black Eyed Susan's are, especially when kissed with raindrops! 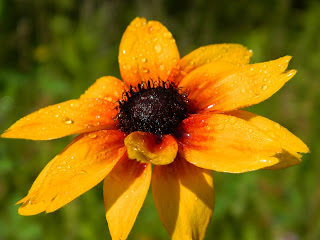 Many of you are aware of the challenges we have faced in removing a giant double hemlock stump in preparation to build our much desired deck (you can click on the link to see the previous posts).  Well, we were finally able to finish the job!  I'll give you the final steps in brief...

Robert came back with his backhoe to try once again to finish the clearing and grading the ground... 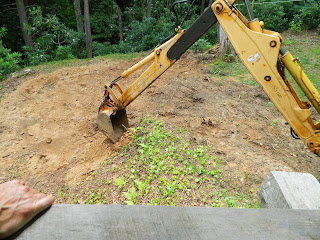 ...unfortunately, the ground continued to be spongy, which perplexed Robert (and Mountain Man) greatly... 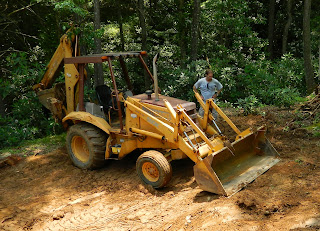 ...so we once again were on pause...though Robert was able to push the huge stump further into the woods, woo hoo!...it was really cool to see the stump roll right over a small (and dead) hemlock tree... 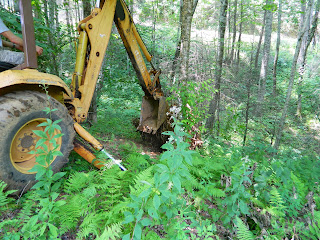 ...then Charlie offers to help with his 4-wheel drive Mahinda, a much smaller therefore lighter machine, and as I said 4 wheel drive...Robert said it worked for him (he was probably greatly relieved, though too much a gentleman to say so)...so we were making progress once again... 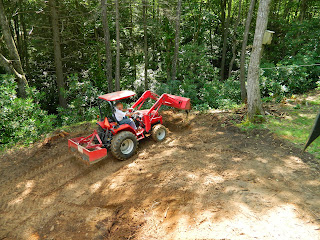 ...this does not mean we were without hiccups, as the ground was still spongy, and Charlie and Mountain Man discussed the options... ...but woo hoo and happy day, the project was finally completed! 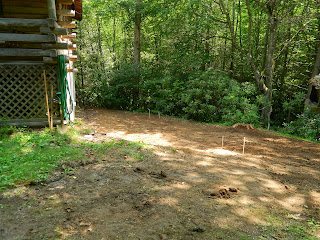 The four sticks you see are the markers for the end of the deck, @ 14 and 16 feet...I have always been advocating for 16 feet, and do believe my logic has satisfied the naysayers.  The next project, which you will absolutely, without a doubt, read all about, is the marking out of the path/drive for the 4-wheel drive ATV we have yet to acquire (this is intended to be a double duty pleasure ship and work horse), the laying of grass seed on the ground surrounding the path/drive to prevent runoff, laying of straw to hold both the grass seed and the dirt where there will be no grass seed but eventually gravel (both under the deck and the path/drive, and ultimate building of the deck.  Much to do but, once again, give me a WOO HOO, we are on our way!  Nothing like the success of finishing a step in a project!

Thanks for reading my blog, you are the best f/f/r/s/f's, see you tomorrow,
Lise
Posted by Lise at 6:37 PM

I am proud of you for putting out the straw, but you might want to do even more to control erosion. I live below a construction site and when the house was being built a river of mud washed down over our yard after a rain. We had to ahve someone shovel mud off our driveway - not once but twice and it was all at our expense.
Straw had been laid on this man's bare yard, but it was not nearly enough.
Just a word of warning since you are new to the mountains.
I love your blog.

So glad the stump removal is completed. That first flower is bee balm and one of my favorites!

Your clearing looks beautiful! So will a 16 ft deck! Hope you win.

Excellent suggestion Glenda, thank you for that, after last nights storm I can see we will need good erosion control until we get the deck and gravel in.

Ahhh, Mamabug, I can always count on your flower knowledge! Bee balm, love the name!

Patti, I know, I can not wait!

Love the flower photos...they go a long way to offset the heavy work involved in preparing the land for the deck. Take time to investigate all erosion control options otherwise you could have a big problem. Erosion management is more difficult than one expects! Big hugs!

Thanks Dad, you are not the first to mention this, and we will think carefully through the whole process! Big hugs back:)

Great work!! I really appreciate your work.It is not a easy job to remove this tree stump from ground.Thanks for sharing.

Superb Post,I have spent a lot of time to gain effective info,I liked it very much,Thanks for sharing.