Last Night Was A Knee Slapper Of A Night

Our night out yesterday was a load of fun, the grand finale being The Liars Bench entertaining performance at the Mountain Heritage Center.  Mountain Man and I totally enjoyed the show!  I kept tapping my feet and bobbing my head with the music, and at one point I laughed until I had tears in my eyes...it was a knee slapper of a night for sure!


I'm just an ordinary girl, living my log cabin life, and by no means an official reviewer, but I would like to share a little of what I saw..

This first photo is Gary Carden, who started The Liars Bench in 2010, speaking with Paul Larussi.  Paul always plays the first and last song of the show. 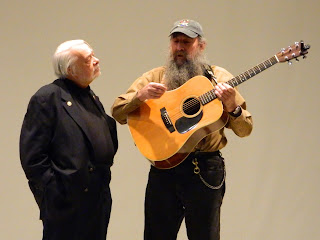 Paul's authentic Appalachian folk ballads were played with mountain charisma and a style all his own (haven't ever seen him before, but I feel totally confident about my thoughts on his style)...I sure wish he would have played more! 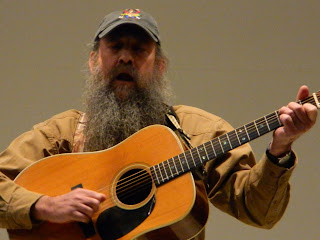 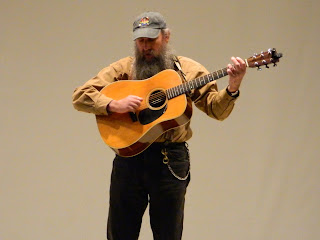 William Ritter, a very talented fiddler, played The Belled Buzzard, one of Mr. Carden's "whimsical, imaginary critters" after having learned it only the day before the show (I'm pretty sure I understood that correctly).  There's more about the critters on The Liars Bench site.  I would have liked to have heard more of William's artistry too...I read he's a Liars Bench regular...looking forward to more! 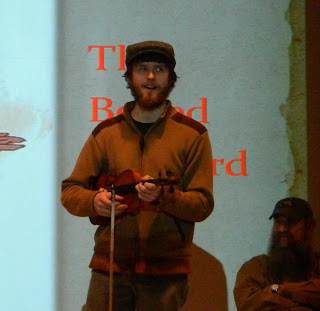 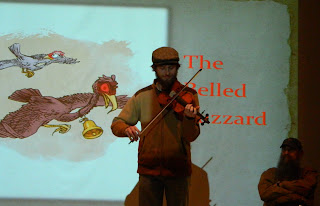 Marvin Cole, who usually presents a Mark Twain oratory, chose to share a comical meditation on outhouses.  He animatedly shared the escapades of a champion privy builder, giving the details of a lifetime of construction decisions stating "I'll tell ya fer why".  His monologue had me in tears more than once! 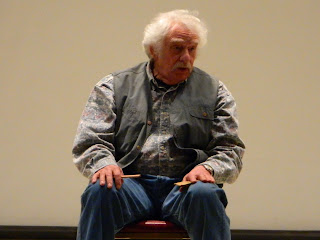 I must admit, his soliloquy was my favorite part of the show! 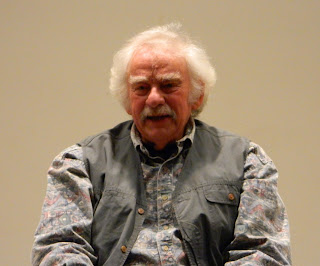 Sheila Kay Adams, known as a gifted storyteller and exceptional banjo player (hope to hear her play next time) entertained us with true stories about Dr. John R Brinkley, the goat gonad doctor, his radio broadcasting and radio antenna dental fillings (eccentrically peculiar fellow, check out the link to learn more), along with a tale of a ghost story with a surprise ending. 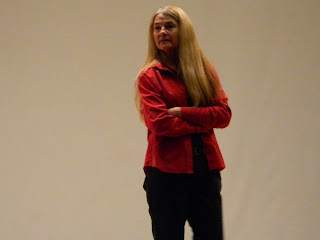 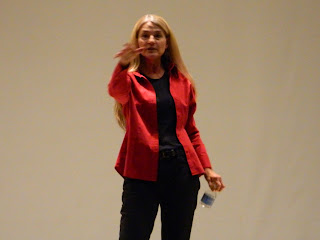 Mr. Carden and their mascot Bodine listen intently as Paul played the final ballad of the evening...Bodine makes a fine end table, donchathink? 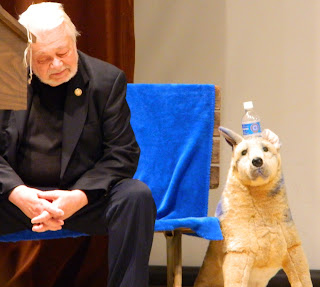 The show was terrific and we will definitely go again...they have new fans in us!  In fact, they have lots of fans...the seats were filled and people were lined up along the sides of the auditorium!
All images and content are subject to copyright and are the sole property of Lise's Log Cabin life. Please email me at liseslogcabinlife@gmail.com
prior to copying anything posted on this blog.  Thanks!

The rest of the evening was also a success...dinner at Kosta's was delicious (as usual) and we finished dinner early enough to walk through some of the Mountain Heritage Center's exhibits...more than we could see with the time we had, so we will be back!

A few non-related tidbits of information...like BTW, but a different way of saying it...

Pogo is back to his normal healthy self...he ventured up the mountain a couple times today and is eating normally now...yeah for Pogo!

We had snow flurries this afternoon!  Make me laugh out loud...it was too warm for anything to stick, but it was there, I saw it, and that's a true story!  Heard that a lot last night...had to use it!

Working on the next deck post, complications slowing the process...more to come on that.

Thanks for reading my blog, you are the best f/f/r/s/f's, see you tomorrow,
Lise
Posted by Lise at 7:06 PM

Sounds like you had a toe tapping, knee slapping good time! Hugs!