In my opinion, nature is one of the best forms of entertainment that exists.  Lately, I've been perplexed by a curious thing happening with this owl house...over the past several days, I noticed the nesting material would periodically (and most mysteriously) pop in and out of the hole, though I never saw a bird or any other creature making that happen.  Then this morning, I watched as this White-breasted Nuthatch flew to the box, stuck it's head into the hole and pulled out a little clump of shredded grass/nesting material (there didn't seem to be anything inside the box that disagreed with what was occurring)... 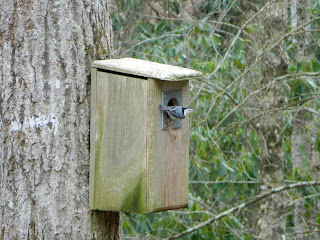 ...and brought it to the top of the box.  He (I'm presuming it's a male based on the lack of chestnut colored flanks and undertail, click on the White-breasted Nuthatch link for more information about these lovely birds) began pecking at the clump.  I wondered what he was doing, my best guess being that he was trying to get some little breakfast bugs out of it (female Nuthatches are the nest builders, so I knew he wasn't trying to steal some good home building material for the family to be ). 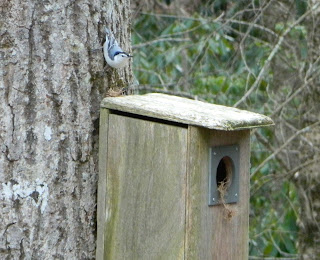 Then the wind blew it away (you can see it near the lid of the box in the center of the photo). 'Nooooo!' I thought to myself...I felt bad for him, having worked so diligently to steal away a little something, just to have it blown from his grasp! 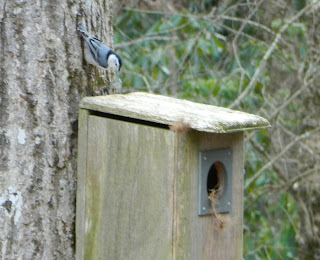 He came back to the opening as if to consider trying again, 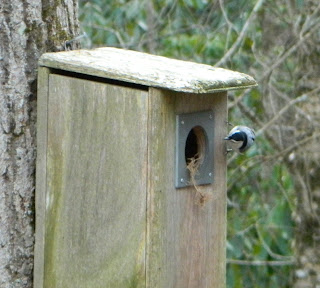 but chose to go sit on the tree above the box instead.  He finally flew away, never to return (as far as I could determine, and believe me, I watched!). 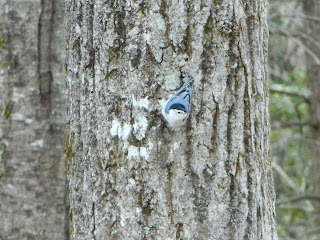 I know birds don't have big brains and don't think like we do, but I sure did wonder what was going through that little guy's brain cells as his breakfast plate blew away!   As I said, nature is quite entertaining, I can't wait to see what tomorrow brings:)

PS...I still don't know what causes the nesting material to move in and out of the box, but we have our critter cam aimed at it, so hopefully the mystery will be solved!

I've thought of getting a critter cam. Which kind do you have? - Margy

Hi Margy, we are using the Bushnell 8MP cam with night vision. We like it so much, we bought a second one for our river place. The pictures are great and the batteries seem to last for a very long time...and we use it a lot!

You know me...I'm a "bird guy" so keep up with the good bird photos. Hugs!