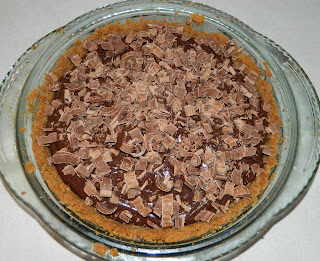 I doubled the above recipe because I wanted a thicker crust...not a great idea, I'll tell you about that shortly. 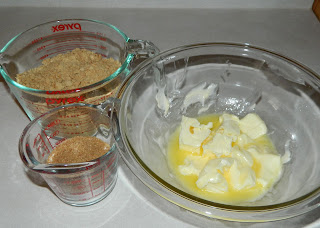 Pie Ingredients:
2 boxes of chocolate pudding mix (yes, you can make your own pudding, but this is easy chocolate pie)
Milk per the pudding recipe
1 chocolate candy bar (you can use any type of chocolate, I used milk)
I forgot to take a picture of these ingredients...

Begin by making the pie crust.  As you can see in the picture of the crust ingredients, my butter was beyond room temperature (I used the microwave and it melted it some, so I began by mixing the butter to reconstitute it).  So I blended it together to reincorporate it. 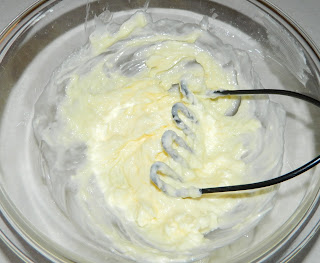 Blend the sugar and butter together. 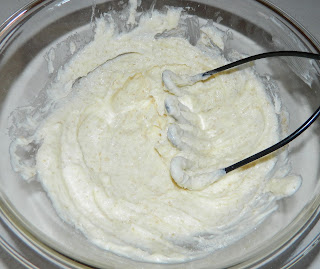 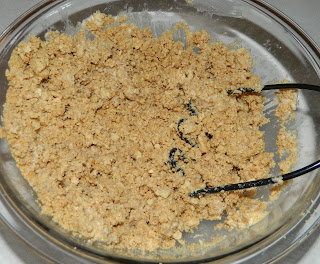 Press the crust into the pie pan (I find using my fingers is the easiest, though a spoon can be used as well...if you use a spoon, make sure to put it in the fridge to get it cold so the butter doesn't stick to it).  As you can see, I had too much crust.  I decided to scrape some out and put it into another pie pan, though it wasn't enough to make a second pie. 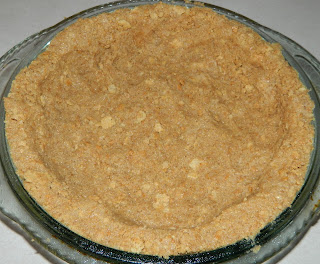 Bake the crust in a 350 degree oven 8 - 10 minutes when not doubling the recipe.  I ended up cooking mine for 18 minutes because it was so thick.  I also used a paper towel to remove some of the butter as it was pooling on top of the crust mixture while it cooked...I definitely do not suggest doubling a graham cracker crust recipe!  This is my cooked crust, not bad when all is said and done. 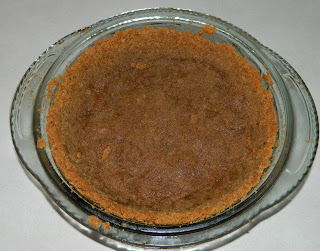 Please note you do not have to cook the crust.  But I thought it would make it tastier.

This is the excess crust I cooked in the second pie pan.  I am going to save it to use as a crumble topping on fruit or something like that.  It is absolutely delicious!  Tastes caramelly/butterscotchy and is a little crispy/crunchy.  Would be good on ice cream too!  I think it will be the perfect crust for my chocolate pie! 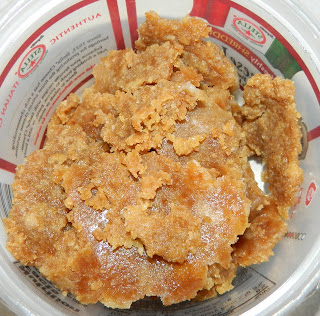 Make the pudding and let it cool to room temperature along with the pie crust.  Once cool, pour it into the crust.  Now take your candy bar and drop little shavings onto the top of the pie (I used a knife and cut small slivers off the candy bar).  Cover the completed pie with saran wrap and put into the refrigerator until you are ready to serve.

Johny's favorite way to eat this is topped with real whipped cream.  Pour some heavy whipping cream into a cold glass bowl, add a little powdered sugar and whip it up until it peaks.  You can also add vanilla flavoring, or a splash of your favorite liquor!

This will make a delicious ending to my traditional turkey dinner!

Thanks for reading my blog, you are the best f/f/r/s/f's, see you tomorrow,
Lise
Posted by Lise at 6:49 PM

And yes, Mountain Man ate a piece for Christmas Eve breakfast! Hugs back, and Merry Christmas to you and Donald too:)

Lise, I'm behind on reading your blog, but I love this post on making the chocolate pie, my favorite pie.I appreciate your confessions of what you did wrong and showing all the photos. I'm glad you had such a great Christmas. Happy New Year.

Thanks Glenda. If you try the pie, you definitely don't want to double the crust recipe, and I am not even sure I would cook it... Happy New Year to you!