Despite the few unexpected "accidents", Jessi and Liam's vacation has been wonderful.  We brought yesterday to a close with a fire in the fire pit and catching fireflies (a first for Liam). Liam watched patiently as the fire began to burn (like the little stand we made for the pit to keep it a little further from the deck?...and it rolls!)... 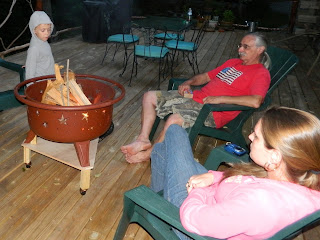 ...and quickly demonstrated a healthy respect for it as the flames grew... 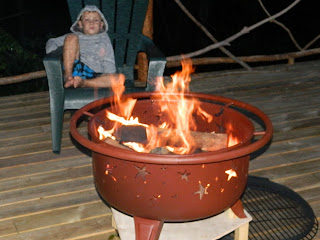 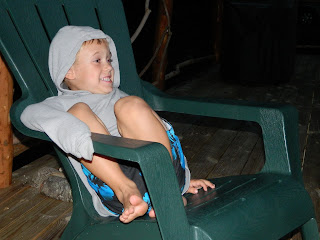 He found it so hot that he moved his chair far away, then started taking pictures with his mommy's camera... 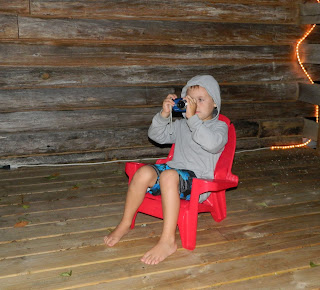 ...he actually is quite intellectual when he talks about what he's photographing, and some of them are quite interesting! 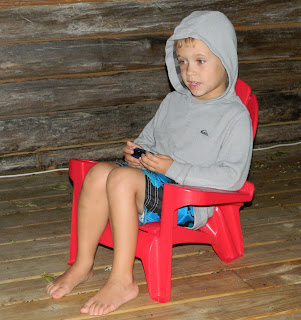 When the fire burned down, we went into the woods to watch fireflies.  This is the only photo I have of it (not sure what these spots are, the flash reflected off something in the air, but it wasn't the fireflies), the fireflies flash so quickly I couldn't get a picture of them with my camera.  Liam was so excited to see them flashing everywhere, chasing after them and trying to catch one, which Jessi eventually did.  We put it in a small jar so Liam could see it up close and then he set if free...cute to watch. 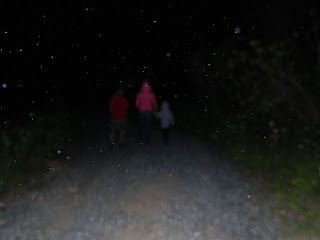 This morning, I woke to Liam standing next to my bed saying "Mémère, I'm ready to go pee in the woods"...LOL, what a way to wake up!  Later he spied a daddy long legs spider, and after making sure they don't bite, gently caught one and let it crawl around on him...such a boy! 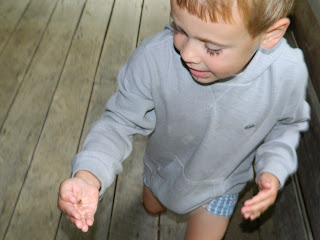 We stopped at the garbage/recycle center on our way into town (another first for him) and Liam tossed the plastic recyclables into the dumpster like a pro! 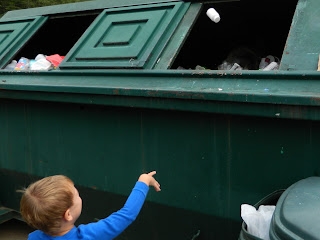 After taking care of some errands, we then stopped by the Heinzelmannchen Brewery in Sylva (a microbrewery)...we enjoyed tasting some of their beer and brought some home to enjoy during the rest of the week.

It was a rainy afternoon, so a little relaxation and a movie was in order.  Now things are drying up, and Jessi, Liam & I are going for a ride on Big Bear (ATV).  If things dry up enough, we'll be making another fire and roasting marshmallows (a required errand today).

It's been a great day so far and it's not over!

Thanks for reading my blog, you are the best f/f/r/s/f's, see you tomorrow,
Lise
Posted by Lise at 5:04 PM

I am loving all the posts about Jessi and Liam's vacation. It sure is a joy to see the wonder in the child's face as he explore nature. Thanks for the visit.

Thanks Redlane Geraine...we are having a fabulous time, and thanks for coming back!