About 2 years ago, we lost our sweet cat Meesy.  Johny's mom used to feed and love this outside cat at their home until she (his mom) passed away at which time his dad continued to feed Meesy until he (his dad) passed away.  We then took Meesy home with us, and though she was predominantly an outside cat, she also came indoors for a little inside reprieve and cuddling time for us. 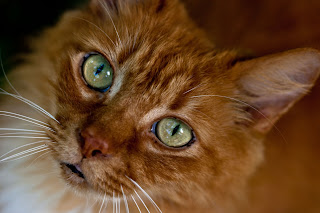 Prior to Meesy, we had our dog Pogo and decided on no cats.  I am allergic to cats, and Johny had had some bad experiences with cats spraying furniture and such.  But when Meesy came home with us, we both fell in love with her.  Then one day, after she became a beloved member of our family/household, she never came home.  We searched and searched, placed ads, went to meet with people who thought they saw her, but to no avail. 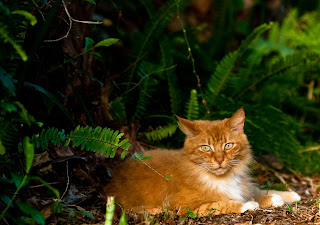 It didn't take long before we decided to adopt another kitten, and Fluffy entered our lives.  I've written about her many times...we love Fluffy, and she is predominantly an inside cat except for her stalking excursions:) 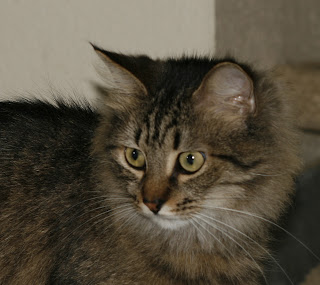 This morning as I walked along the river, I was shocked to see a cat that looked just like Meesy.  I told myself not to be too excited (I know there is a family on the river who has a cat that looks very similar to Meesy, in fact, when we first lost her, I thought their cat was our cat) that this might not be her.  But I had my camera, so I snapped away.  I called her name, and at first she seemed unfriendly, but then she began mewing after I called her name. 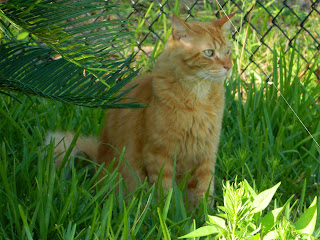 I tried to approach her, but she ran into the property of the fenced-in half constructed house that was abandoned years ago when the homeowner was arrested for embezzlement (a story for another time). 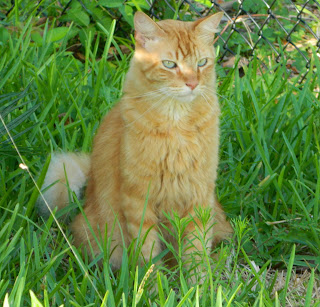 I then hurried home to compare pictures from today and the past...and it is indeed Meesy.  I know it because her eyes have little spots on the lids, and when I zoom in, the same spots exist.  I then filled a bowl of water and got some cat food and drove back to the place I saw her.  I called her name and walked around, but she did not return.

When I spoke with Johny, while we were both thrilled to know she was still alive and seeming to do well, we discussed the possibility of my trying to bring her up to the cabin.  But then we determined that, unless she comes running to me and willingly comes with me, it will be very difficult to capture her.  And because she is used to (and surviving in) river life, a move to living outdoors in the mountains might be the death of her (we do, after all, have fox and coyote).

I've gone back to the sight I spotted her again, calling her name and with food and water, but with no success.  I will try again tomorrow morning about the same time I spotted her today...  I can't decide which emotion feels stronger to me...the deep sadness of loosing her yet again, or excitement with the fact that she is alive and prospering in the wild.  In the end, nature is making the decision as to her future, because I can only bring her with me if I find her again and she decides to follow me...and I'm just not sure that's the right thing to do.

Thanks for reading my blog, you are the best f/f/r/s/f's, see you tomorrow,
Lise
Posted by Lise at 3:15 PM

I had a cat for many years that just disappeared one day. She was an inside/outside cat as is Tiger the one I have now.
To find Meesy again like this is a miracle, but you can only do what you can do. I know that cats sometimes travel thousands of miles to return home but if you are no longer at that home she knew, maybe she has found her way to living along in the woods. Sad, but cats do make it on their own where dogs often do not. Fluffy is adorable and looks like a cat I had once.

It's tough to loose a pet Glenda, I was actually glad to discover she is still out there making it on her own! We think Fluffy is adorable too, glad we adopted her.

I know dad, whatever will be will be! Hugs back :)