I woke up early this morning to watch the sunrise, as I usually do when I am here on the river.  We don't get to see the sunrise at the cabin, the mountains obscure the view to the east, so I find it especially enjoyable while I am here.  Sitting on the dock watching the sun rise over the horizon is always so peaceful (though the air was particularly heavy with humidity which made me sweat before the sun rose which makes winter really appealing to me).  It's been interesting for me to observe over time that we don't have a lot of birds around here this time of year (I never noticed that before), I guess it's humid for them too, they must be up north...makes me look forward to being back in western NC! 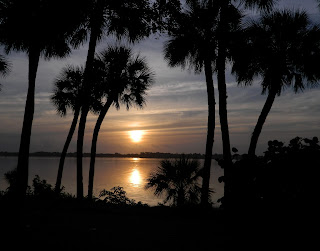 This is almost the same view of the photo above, but taken from the river side...an entirely different perspective of the same thing.  Which made me think...everything is relative to how you (I/we) look at things in our lives. 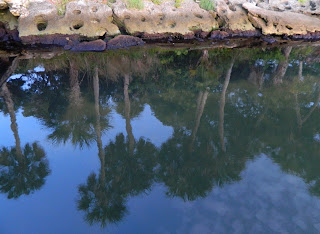 Yesterday was Johny and my 7th wedding Anniversary.  When I was planning this particular trip, neither Johny nor I thought about it.  Until I was getting ready to leave.  I looked at him and asked if he realized what was happening while I was gone, and I'm happy to say he knew.  We were both OK with not being together (we'll celebrate later), but what was most interesting to me was when I spoke to my dad today (he called to wish me a happy anniversary), he told me he had spoken to Johny today (to wish him a happy anniversary too) and Johny had said that in his perspective, this was his anniversary gift to me because he knew I wanted to be with Liam for his graduation.  I would never have known he felt this way if my dad hadn't told me.  Up to that moment, I didn't spend a lot of time thinking about our anniversary, but since that conversation, I keep getting this little smile in my heart that makes me know my Mountain Man loves me. Happy Anniversary babe, love you!

Perspective is everything!  And life is good!

Happy Anniversary! May you have many more happy, healthy wonderful years together!

Thanks Patti, I'm planning on making it to at least 43 years like you and Bernie...ha ha, by then Johny will almost be 100!