There are times when life gives you little happy surprises that add more joy than you would expect. Yesterday, we experienced a few of these moments that I thought you'd appreciate.

I went into a store while Johny was waiting in the car. When I returned he told me he just saw a lady and little girl walking what at first looked like a dog, but after thinking about it he was pretty sure it was a goat on a leash. A goat? On a leash? So we drove around a bit, and sure enough, it was a goat on a leash! I know people have goats for their milk, making cheese, and lawn maintenance, I suppose a pet goat is reasonable. And no, there was no Veterinarian office in the area. It was cute and we chuckled at the possibilities. 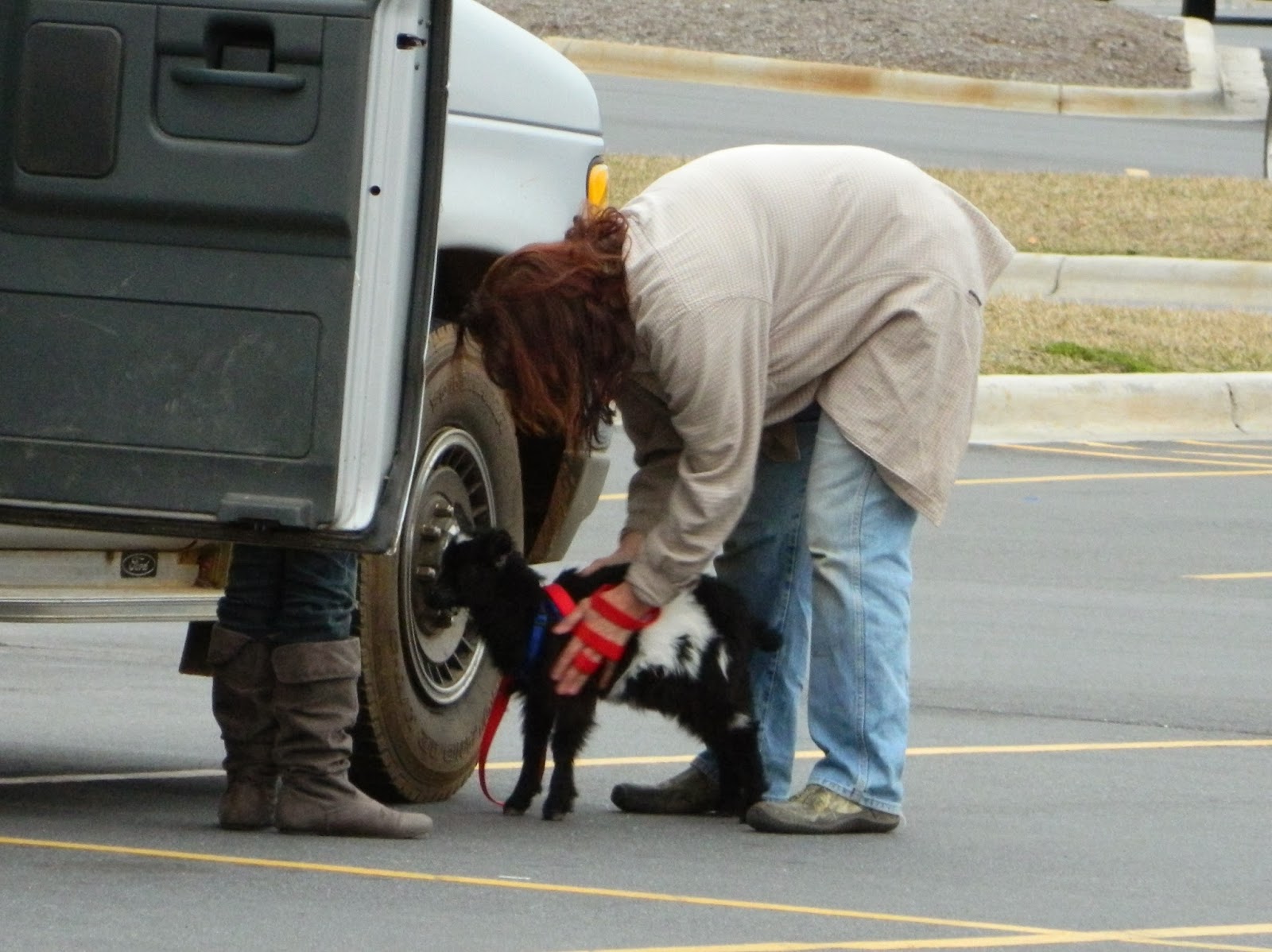 Then I came across my first blooming daffodils of the season while waiting at a red light in town. I noticed them out of the corner of my eye, and immediately yelped with delight. I snapped this picture right before the light turned green. The daffodils in our yard have sprouted but have no buds yet; it was nice to see the promise of spring! 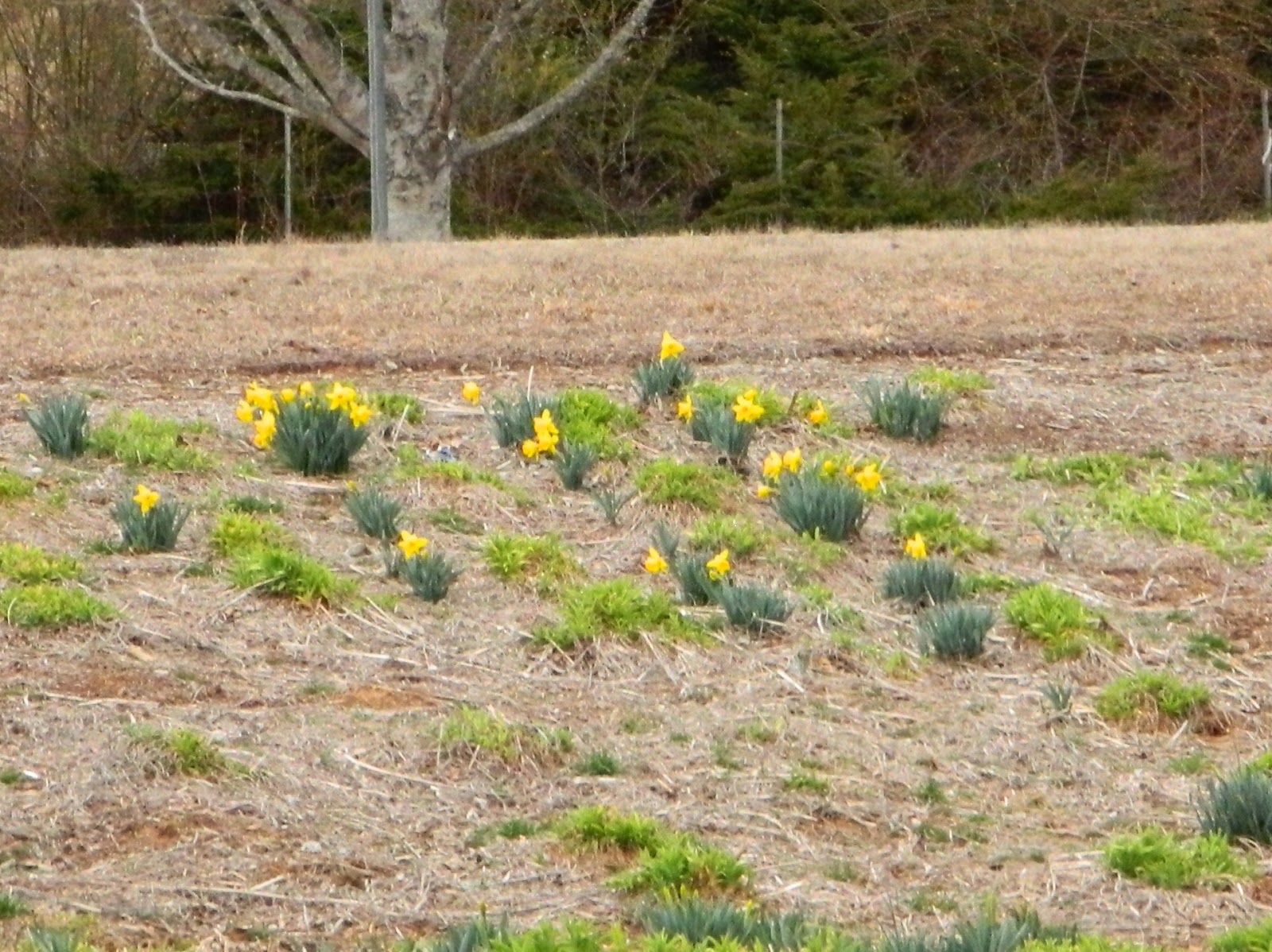 THEN, while we drove up the mountain toward home, we were discussing the rain/ice/snow predictions for our area. We agreed that we probably wouldn't get anything, though Johny did say since they were saying we would get only rain we'd probably get snow. As we continued to climb, I started little pings on the windshield. We decided it must have been tiny sleet and it was bouncing right off the glass,  leaving no wet remains. Shortly after that, we started seeing little white flecks in the headlights. Snow? Shortly after that we noticed a thin white film on the side of the road. Snow! Shortly after that snow was falling! 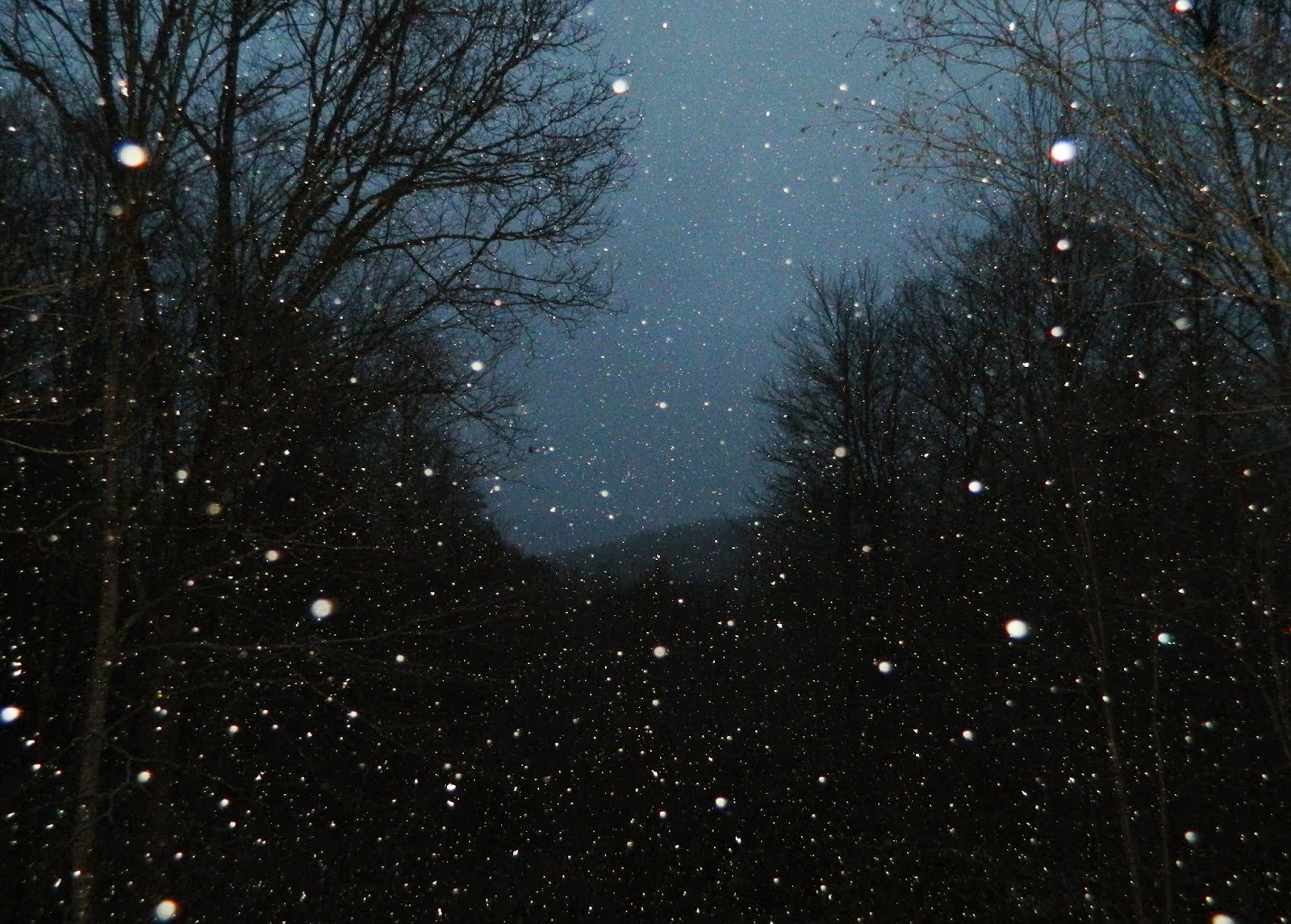 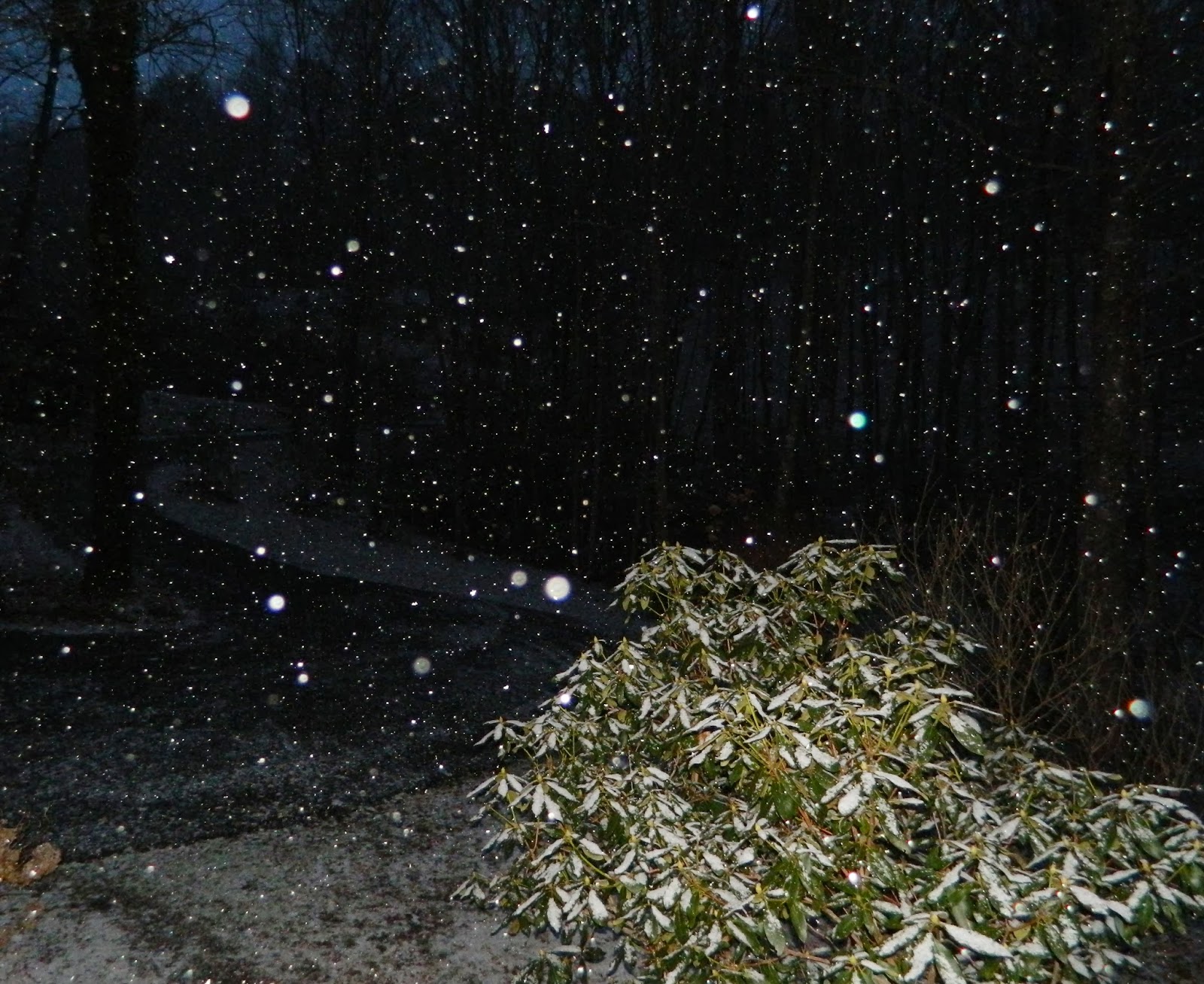 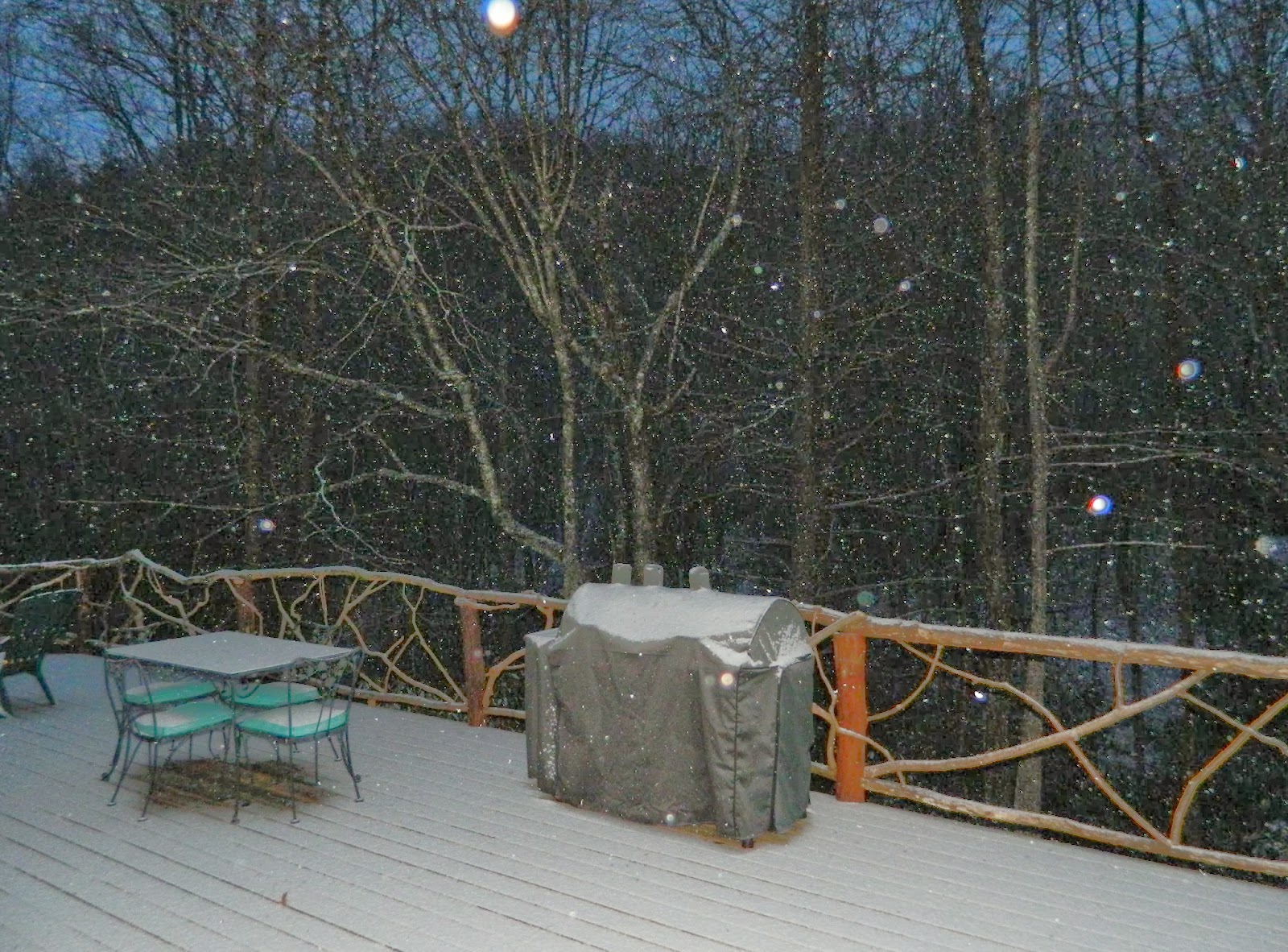 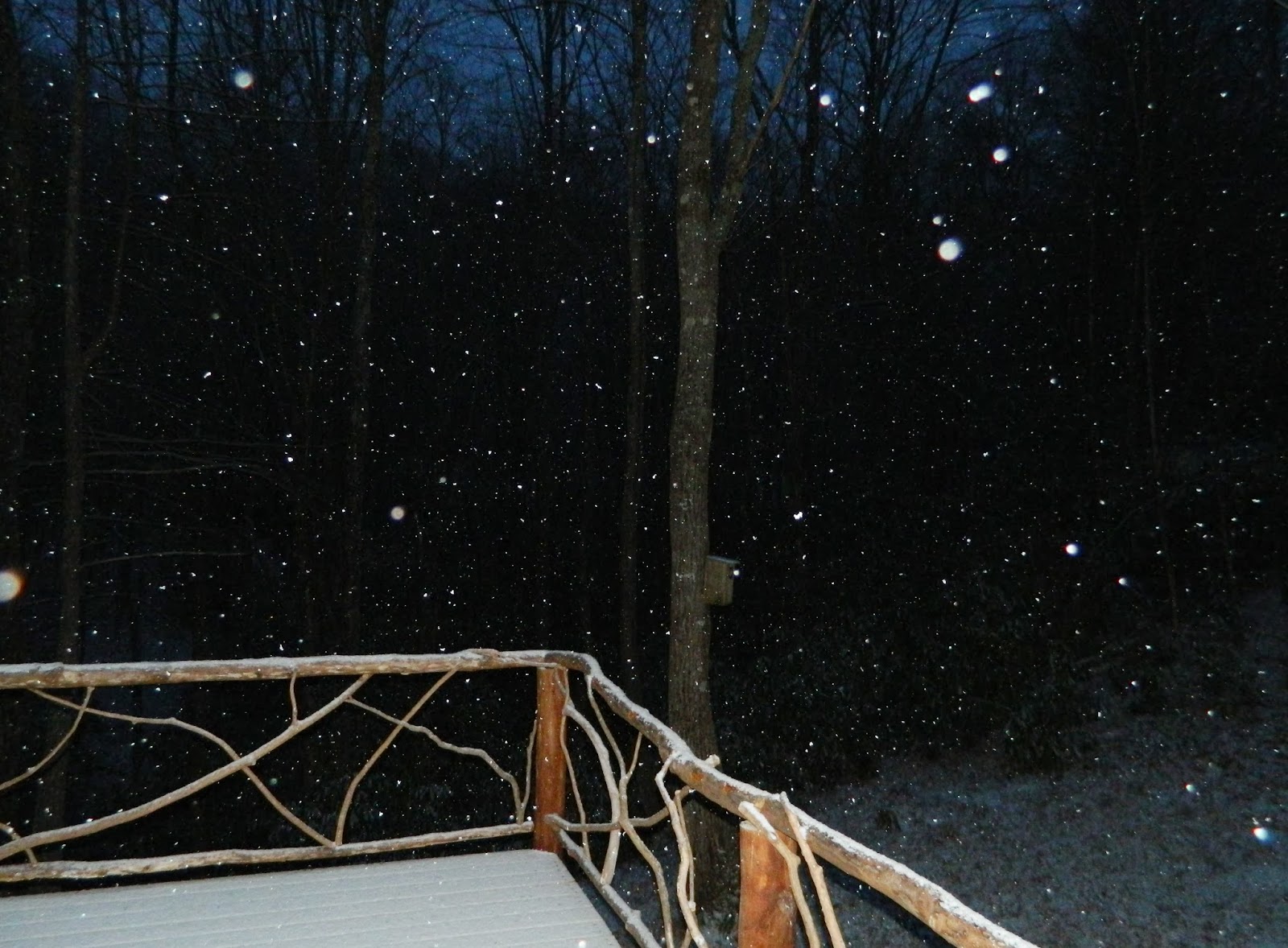 It lasted long enough to cover everything. And then it started to sleet, and that turned into rain. The rain continued all night long and by morning, the snow was gone. But it was a treat to watch one more snowfall, maybe the last of the year.

Thanks for reading my blog, you are the best f/f/r/s/f's, see you tomorrow,
Lise
Posted by Lise at 2:33 PM

WOW daffodils already! Not here yet, another snow flurry forecast is in our future!

Glad you got to see daffs and snow in the same day!

What a great day full of natures bounty. Hugs!

We don't have them up at the cabin, but they are in the valleys! Enjoy your snow, I think we may be done with it.

It was a fun day of pleasant surprises Vicki!

I hope it will be the last of the year! But your pictures sure are pretty! And that little goat! Too cute! I bet those daffodils got nicked. That's such a shame. More flowers will come soon!!!

So true Marie, spring is on its way! It's gorgeous today, 57 degrees and sure to get warmer.