Greening Up the Mountains

Today Johny and I attended Sylva's annual spring festival, Greening Up the Mountains, named for the way the greening of the trees creeps up the mountainside during this time of year.  It was a very nice event, calm compared to some of the festivals in Florida that we have participated in, and I mean that in a very complementary way.  It was a gorgeous day, and though attendance was high, it was not overwhelmingly crowded, leaving room to easily meander along the route and view all the vendors.
We parked where the the Sylva Herald suggested, about 1/2 mile away from the festivities.  I love that Sylva is surrounded by mountains, and as I got out of the car, was welcomed by a beautiful view. 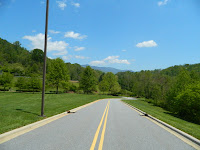 There was a shuttle available to bring people to the event, but we chose to walk.  As we walked  along the sidewalk, people passing in by their cars waved!  Another warm and friendly welcome!  When we arrived on Main Street, people were milling about and enjoying the scene. 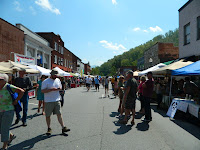 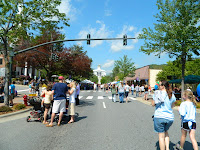 These lovely ladies were manning the Compost/Recycle/Trash tent, where they were collecting people's trash, putting compostable stuff in one bin, trash in another and recyclables in another.  The pot below is the compost that was created from last year's event, after a year of mixing and mixing and mixing.  Look how rich that compost is!  I would have loved to have taken some of that home for our garden! 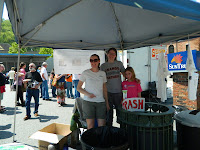 Of course, a festival of this sort can not be experienced without funnel cake...Johny (my Mountain Man) really enjoyed it! 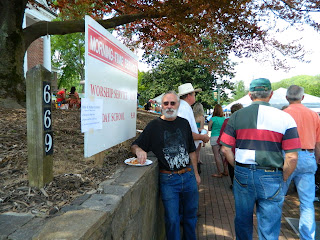 We stopped by the Heinzelmännchen Brewery, celebrating it's 8th Anniversary.  They have fantastic beers brewed locally!  Good stuff!
As we were leaving, we watched as a young girl was wooed by a lovely miniature horse, and was guided by it's owner to kiss it's nose.  For me, the entire exchange seemed to embody what small town festivals like this one are all about! 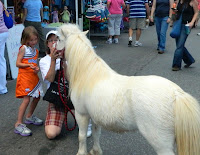 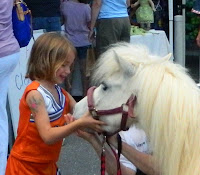 It was relaxing fun, and we are glad we attended!
As you can see, the mountain we are on is still "greening up". 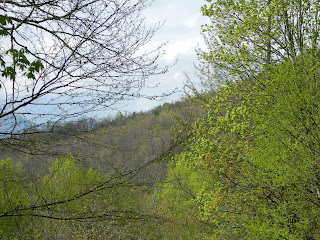 We see new green every day, and soon, our mountain will be covered with a velvety green blanket that will surround us.  It is comforting.  It is protective.  It is green!

Looks like a wonderful event. What is it about men and their funnel cakes? My blacksmith loves them too. More so than I do.

Johny says they are like flully doughnuts, and he loves dougnuts!