Last night, our friends Dick and Ursula came over to celebrate Ursula's retirement and my sabbatical.  They have been up at their place in NE Georgia for the past few weeks.  They brought their dog Gretchen along too, and Pogo had a good time with a friend to hang around with. Well, to be clear, Pogo is not really into other dogs, so he was friendly and welcoming but then really did his own thing after that.  Fluffy, on the other hand, was nowhere to be found for quite some time (she is not appreciative of strangers).  Jumping ahead a bit, Johny and I were pleasantly surprised that as the evening progressed, she did finally come out and say hello to Gretchen, and hang around with the rest of us.  I guess she figured "if you can't beat 'em, join 'em!"

We began our celebrating by sharing some Cremant de Limoux, a brut sparkling wine.  It was bright, dry and very refreshing.  Then we took them on a basic walking tour along our property, enjoying the scenery and showing them what ramps look like in the wild and explaining how to harvest them (Johny had harvested them earlier because it is quite time consuming).  On the walk back Ursula found some wild strawberries on our land that we did not know existed!

Once we returned, it was time to begin preparing our meal.  Johny and I wanted to treat them to a dinner using wild edibles, so we chose Ramp Pasta, a recipe adapted from Yoshi Yamada, thank you to Dick for sending me the link to some ramp sites (I followed Yoshi's ingredients and process but had the pleasure of  deciding on the amounts of everything as his description did not include that), 5 grain homemade garlic bread (the spread not the bread, haven't tried making bread yet but I will!), dandelion salad, and Rhubarb Crisp topped with homemade whipped cream with Cointreau. 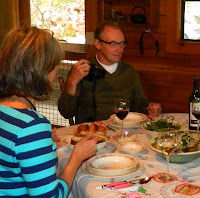 The preparation was a group effort, now mind you we have a small galley kitchen, so you know we have to be very good friends!  Ursula helped to be sure the bread didn't burn and Dick was busy taking lots of pictures, but I was cooking so did not get pictures of him in his glory, (or much else while cooking for that matter, though I did get the steaming ramps beginning to cook as you will see below, it was so cool!), but he was still taking pictures during dinner, and I caught that! 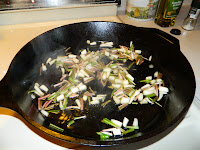 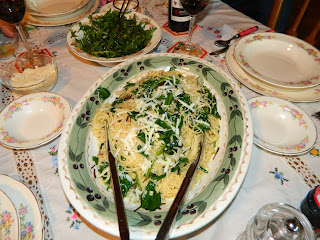 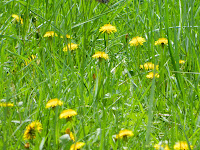 A kind word about dandelion, it is so delicious and good for you.  I know most people consider it a weed, but really, this is an incredible edible!  A little bitter but in a delightful way.  The photo above shows the dandelion salad above the pasta; it does not do this delicious salad justice. The photo to the left is this wild edible in it's natural habitat, just beautiful. I highly recommend you put this on your bucket list! You will be pleasantly surprised!

The finale of our dinner was rhubarb crisp with homemade Cointreau whipped cream.  The recipe for this delectable, pretty desert will have to come in another blog.  But to whet your whistle... 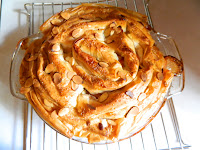 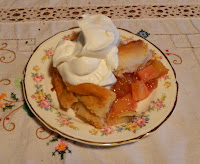 Our evening was a truly special...it is always wonderful to spend good times with good friends with good food and good wine and good desert...Thanks Dick and Ursula, come again!!!
Posted by Lise at 8:03 PM

Just found your blog through your guest post at Blind Pig and am browsing through, enjoying it very much.

Thank you Glenda, it was fantastic!

Thank Mrs. K at Home, just looked at your blog and am enjoying that as well, signed as a follower!