Daddy, This One's For You

My Dad is new to the whole blogging world and doesn't really enjoy complicated Internet activities.  However he has been commenting on my posts via email almost each and every day, which I have been appreciating tremendously.  When he was here for a visit recently, we spoke about how to post comments, and he said he was committed to figuring out how to make it happen once he returned home from vacation.  Persevere he did, and today, I had my first comment from him on my blog rather than an email.  It made my day!

While he was visiting (I have several posts about it), we passed by a waterfall on the road leading up the mountains toward our cabin.  It is a well kept secret, set far back from the road.  One day, as we passed by, and I pointed it out to him and Donald, he wanted to take a picture.  It was 3:19pm, and the sun was just exactly right, shining on the water at just the right angle, causing it to sparkle and shine while targeting the water specifically (rather than the trees and brush surrounding it).  So we stopped in the road (there is no turn off opportunity or curb) so he could snap the shot.  Of course, as things happen, a car approached, and we had to move on.  We tried several additional times to capture that scene, but the timing of the sun hitting the falls never happened in the same way.  He kept joking about how that moment would be a mere memory!  So being the loving and dedicated eldest daughter that I am, who loves her father/daddy/dad/friend/teacher/mentor dearly, has been trying to capture the moment again. 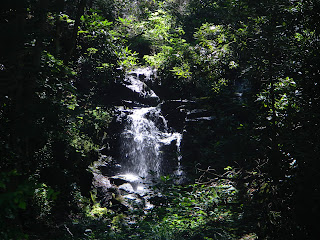 ...not quite the same as being there, and not taken at 3:19pm, but I think it captures the feeling.  I will never again pass that waterfall without thinking of you!

With all that said, Florida is getting a bucket load of rain from this tropical storm, especially the Gulf Coast.  So I hope that all is well dad.  While we had some spectacular evenings on the porch when you were here, watching the fireflies and bats & all 4 of us chatting away, the sunsets were lovely but not spectacular.  So today, with the thought of calming winds and rains, the scene from the porch... 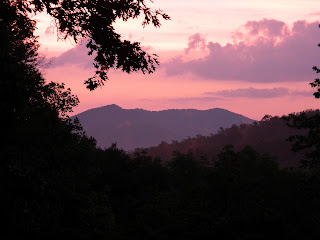 Thank you for reading my blog, you are the best f/f/r/s/f's, see you tomorrow,
Lise
Posted by Lise at 8:17 PM

That's a beautiful waterfall and picture for your Dad..I know you are so excited to have him aboard..Susie

What a heart warming post! You are so blessed to have your Dad!

Thank you for your persistance! Now I have both the image in my memory and a photo to view! Donald and I had a wonderful time with you and Mountain (Mushroom) Man...emphasis added by Donald. He has also shared his "Are you crazy" message to many family members and friends. Lots of rain here...so far...no complications. Thanks for the beautiful sunset...we haven't seen one here in several days!

Awww Lise-I loved this post : ) So special to have a good Daddy in this world : )