Today was a day of action! Well, most of our days are, but I felt particularly re-active to yesterday's frustrations.  So off to the garden we went.

I mowed all the weeds around the perimeter of the garden.  They were bothering me...messy, in the way of future growing cantaloupe and zucchini, not attractive, and distracting (to me anyway, another one of my "things" like perfectionism, mess/lack of order).  I put up pie tins to repel the crows, in case they are the scoundrels eating my corn.  I sprayed the veggies with a natural pest repellent (simple soap) to keep whatever has been nibbling on my corn and beans away.  I also planted some spinach, and several lettuces in the rows where the fava (broad) beans did not germinate (we do have one fava bean growing beautifully:) )  We weeded.  We thinned out the carrots and turnips and because I hated to just throw them away we sort of transplanted them, well, covered them with a little soil, we'll see what happens.  Below is the end result...nice... 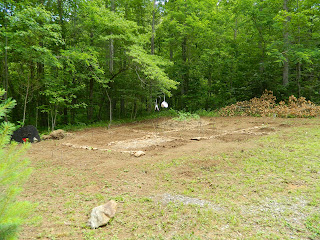 And woo hoo, I got Mountain Man to agree to remove more trees.  The smaller trees, because the bigger ones that are causing the majority of the shade are much too large to cut down with the garden growing; if we cut them to fall across the road, they could hit the power pole (not a good thing and surly not worth the risk), so we have to wait until the garden is done for this year before those trees are felled.  But there are many smaller trees creating a lower canopy that I believe will help letting in more sun.

Sooooooo, off I went with the battery powered chain saw and manual clippers.  And yes, it was Lise the Lumberjack again, Mountain Man went mushroom hunting (I think he couldn't stand to be around the cutting or something).  Anyway, I digress.  I aggressively got going on the snipping of saplings and branches in my way.  At one point it occurred to me that, despite the heat, I should put my sweatshirt back on top of my tank, being that I was in the woods, and ticks are bad right now.  And who knows what else might descend upon me from those thick trees.  So I did.  Then I continued my aggressive attack on the woodland surrounding my garden.  Once I started with the chainsaw, and cut a few, I realized I should begin with the trees further behind within the bunch I was planning on cutting, so they could fall like dominoes, only opposite.  You know, the ones behind are down, so the ones in front can fall on top of the ones behind (now down)...very logical in my opinion.  At this point it occurred to me that, (oh, I am sweating profusely now), that I ought to use a stick to bang around the ground as I moved deeper into the woods.  So I did.  Of course, I had been making a lot of noise already, but I said "SELF: better safe than sorry", yes out loud, LOL!  Nothing scurries.  I am happy.  I take out the clippers and start clipping away the small brush.  Now I take the chainsaw and begin cutting a relatively small tree because it was in the way of the bigger one I was going for, even though it (the smaller one) was in front of it (the bigger one) [I know, kind of putting the kibosh on my backwards domino approach, but it seemed necessary to do].  And then....OH S***!!!  All of a sudden I spot it.  Looks like POISON IVY!  A little around the base of the tree I am presently bringing down, but more so around the bigger tree, climbing it, in fact.  I am sure of this identification, as I easily recollect the image of it climbing up Bob's tree and his story about his severe reaction.  This bunch is a vine with three leaves that stem off one stem, a little bit serrated edge, climbing up a tree...ARGH!!!!!  "SELF: What to do, what to do".  I have to finish this one tree (another one of my "things", can't leave something half way done) so I continue with the chainsaw in spite of the poison ivy risk, though I am now being super-duper careful not to touch it.  Down it goes!  Woo hoo for Lise the Lumberjack!  Of course, I had to cut the poison ivy vine on the big tree (more of that 'have to finish things' business), because of course I still plan on cutting it, down, down, down!  Then, I ever so carefully close the clippers, careful not to touch the clipper part with ivy oil, and back away.  I'm looking very intently around my feet to avoid the dreaded vine.  As I exit the woodsy area, I wonder to myself if I have touched it at all.  SELF: "man, I've been sweating up a storm in this head to toe outfit, so I've been using the back of my gloves to wipe my face...maaaaaaan oh maaaaaaan, I sure hope I don't get itchy! S***!!!!".  Well, what's a lumberjack to do...it's a hazard of the trade (good positive thinking during my ivy panic).  I pack up my stuff like there is no tomorrow and head to the cabin.  I use my gloves to remove my clothes.  I put it directly into the washer with hot water and soap.  I jump in the shower and scrub.  Safe???

After my shower, I get on the Internet...how long before symptoms show up~a couple hours to start to get itchy...other things to be aware of~can be real bad stuff~worst itches ever~could last 1 - 3 weeks~DON'T TAKE A HOT SHOWER, IT OPENS YOUR PORES AND SPREADS THE IVY OIL...I get off the Internet.  Too ******* late!!! (You fill in the blank with your vilest word possible, believe me it wasn't pretty here, in fact a chain of not pretty words.)  And then, "SELF: what's a log cabin girl to do???"  Sing it with me...que sera sera, whatever shall be shall be, the future's not ours to see, que sera sera...

So far, so good.  Just itchy paranoia.  I'll have to let you know. But the caveat to this story is Mountain Man comes back from mushroom hunting, and says, show me what you are talking about.  So I do.  And (of course, this is not to my knowledge) he brings back a leaf to check it out against all the informational books he has.  He says, "this is not poison ivy, see?". So I say OK, yeah.  But I head back to the garden to look, and sorry it IS poison ivy... 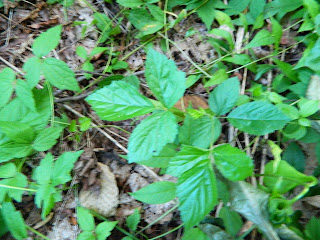 ...see how the leaves come off one stem, two in the center and one at the end?  And see how the veins come from the center of the plant to the outer edges?  Poison Ivy!
Happy notes:
Our purple potatoes have their first flower buds... 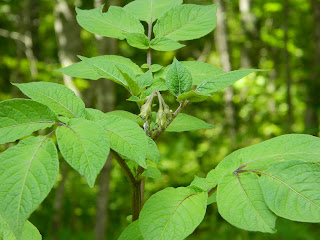 After the ivy ordeal, I went back to the garden (kind of like getting back on a horse after getting thrown, OK, not really, but it sounds good, doesn't it?) and I thinned out the zucchini (was supposed to do that after lumber jacking, but remember I ran away).  I transplanted the 3 I had to pull out, near the cabin.  I figure, why not give them a chance, we shall see... 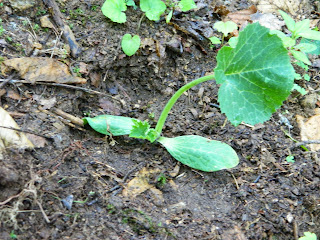 So far, so good, no bumps.  No itchy.  No Poison Ivy infection!!!  I'll keep you informed!

Thank you for reading my blog, you are the best f/f/r/s/f's, see you tomorrow (hopefully poison ivy-less),
Lise
Posted by Lise at 7:47 PM

What a day you had trimming. But it does give you a good feeling when all the brush is cut, providing you don't get the itch!
Yeah! we are getting a little rain!