A Visit From My Brother & His Family, the Sylva Farmer's Market & Judaculla Rock

My brother Bobby (aka Rob, only we siblings call him Bobby), his wife Wendy, their teenage children Logan & Carson, and Wendy's mom Nan made a stop-by yesterday on their way to a week's summer vacation in TN.  We had a grand time!  So much so I failed to take many pictures, too busy with the cooking, etc, and the pictures I took were blurry...humph.  Still trying to figure out the settings for my camera when the light is low.

Anyway...
We feasted on a pasta, garlic bread and dandelion salad when they arrived.  Everyone loved the pasta & garlic bread, not-so-much the dandelion..."a little tough and chewy", I was told. I said "it's full of vitamins! Next time I will make a pesto with it, or better yet, "Dandy Dressing".  That was the end of the discussion, except for Carson's notation in a visitor journal we have where he expressed it was "gross".  I love the honesty:)

After dinner we walked to the garden.  Carson repeatedly went to the creek to fill the water bucket, and said he almost fell in.  He was the perfect water boy:)  Logan kept pointing out how physically fit she is, which she really is, and obviously proud of it...maybe she should have gotten the water, ha ha!  Logan and Carson took turns riding with Johny on the 4-wheeler, and though apprehensive at first, enjoyed their rides.  Of course we had to explain the hole in our yard.  Upon our return, my brother and Johny shot at the targets in the yard.  Bobby got 4/5 shots, and he doesn't even shoot (photo by Carson)! 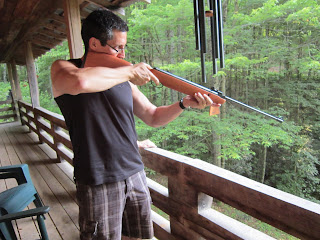 In the morning I made pancakes, yummy.  I did get a picture of this! Nan is in the forefront, then Johny to the right, Logan, Wendy (you only see her head), Bobby and Carson.  It was nice, and the weather cooperated; I thought it would be too cold for them during the night, but it really was quite comfortable! 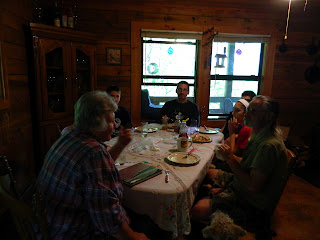 We decided we would go to the Judaculla Rock before they headed out of town.  Being that we were driving right past the Sylva Farmer's Market, I suggested we stop.  We had a couple of neat encounters there...there was a woman spinning yarn, very cool... 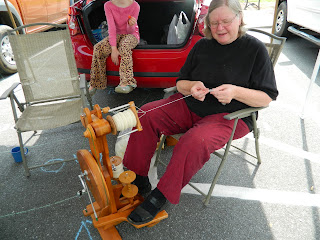 ...and Nan encountered an Art Teacher who used to teach in Orange County Florida with her, small world! 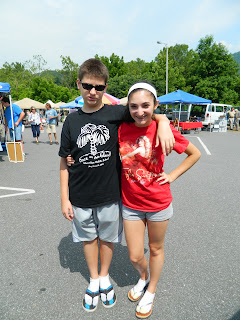 After a few purchases and fact finding about our garden, we headed to Judaculla Rock we went, a fascinating spot with a rock covered in petroglyphs, primarily in the Cherokee language, which are symbols etched into rock to convey a message, i.e. a map, a story, etc.  No one is sure when these etchings occurred, or what they say, and the research continues.  There is a line across the middle because more of the rock was recently excavated, and a new protective boardwalk was built.  The land was recently donated by the Parker family, who has owned it for almost a century; I want to thank you, for sharing this unusual piece of history with all of us! 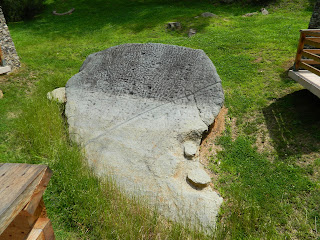 Then, Bobby and family headed to TN.  I was sorry to see them go, I really enjoyed the time we spent together, close quarters and all. Maybe next year, they will stay longer...if I promise not to make them dandelion salad:)

Thank you for reading my blog, you are the best f/f/r/s/f's, see you tomorrow,
Lise
Posted by Lise at 8:27 PM

You should have had Bobby shoot some squirrels and then seen what comment Carson had to say after cooking them!
I'd love to try your salad.

How wonderful to spend time with family! I think I would have liked the dandelion salad, sounds yummy to me.

Lise , always great to have family and friends drop by for a visit special times we will remember later on in life , you'll always rememner the remark the salad was gross lol . Speaking of visiting do you ever stop by my blog? and if so where are the comments? All us bloggers look foward to little comments , as you well know. Great to hear you garden is doing well .

Patti, that is hysterical, being that they are vegetarian...I can hear the groans from everyone now!

Mamabug, dandelion is a little bitter and fibrous, but really delish.

Malcolm, I agree, good memories. And yes, I do visit your blog, and have left comments, I believe the last one was about your hammock. Have you ever considered putting a link for folks to sign up and get email updates when you upload a new post? Makes it easier to stay updated with your news...just a thought! I do understand the desire for comments:)