It was a great day at the Dillsboro Color Fest today.  There were many talented artisans and tasty treats!  The thing I liked best?  A small crowd!  I mean, don't get me wrong, it was well attended, but we easily found a parking space, there was no pushing and shoving, no waiting in long lines...I think you get the idea.  Very different from previous events we've been to in big towns or cities.  Dillsboro is a very small town (even smaller than Sylva), it's claim to fame being the Smoky Mountain Railroad.  The train no longer stops there, but the station still stands proudly, a relic worthy of photographing...I really meant to get a picture of it, and told myself as I walked past it to enter the Color Fest 'remember to take a photo when you leave' (knowing all the while I could very well forget) and whoa is me, I forgot!  Next time I head through Dillsboro, which is on the way to Sylva, I will take a picture to share.

We started our adventure at the Old Time Amish Apple Butter booth.  The apple butter gets lovingly stirred, constantly (about 6 hours), by those who produce the smooth apple cinnamon sweetness. 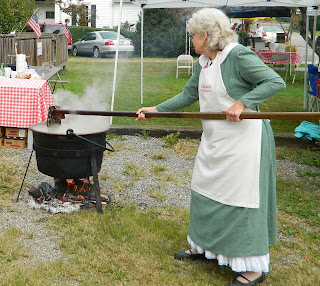 We were warned to stand far from the kettle, as the boiling concoction spits and spews as it is stirred. 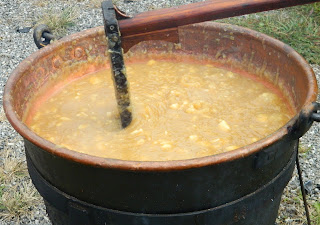 We then stopped at Joseph Meigs booth, who is both an author and artist. 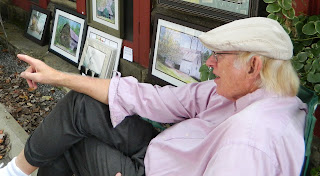 This is some of his work. 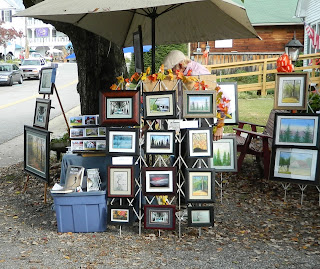 This gentleman was making baskets from pine needles, which were then dipped in bees wax to "harden" the bowl. 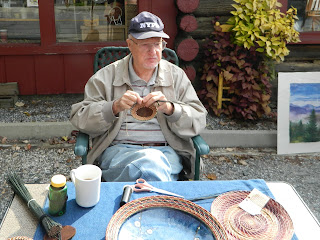 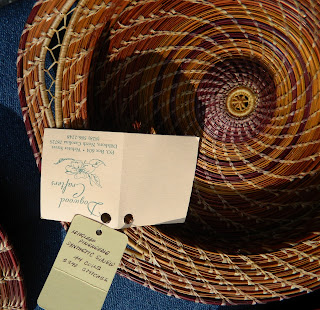 These folks started their Carolina Pig Polish business only a year ago.  It is a BBQ sauce made from sorghum...it has just the right tang and it isn't too sticky sweet or thick. 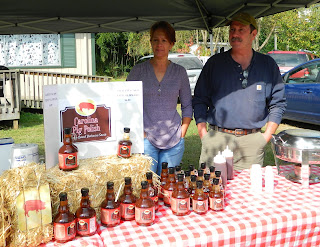 We bought some!  Just across the street from their booth was the Dogwood Crafters  (a co-op of artisans) table of goodies that were baked from their collection of members' favorite recipes.  They had several of their cookbooks for sale, so our best method of selecting was for Johny sample almost everything, then tell me what he liked, then I would sample it.  We ultimately decided on the 'blue' book.  Can't wait to delve into it...one of our favorites was the fig preserves (among other things), which we then learned was not in the cookbook (they did divulge that if I had the Ball canning book, which I do, I could probably find it in there), so we bought a jar of that too! 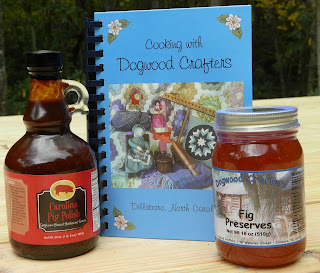 Then there was wine tasting... 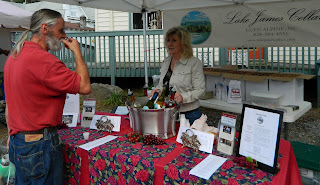 ...and we bought a couple bottles.  Sweet wines good for sipping. 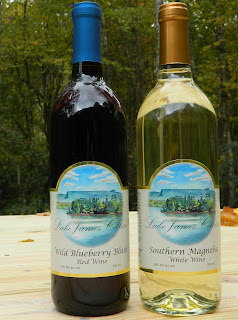 This is Bruce Bunch, an artist and illustrator.  We were quite impressed with his style and colors...vivid, bright, realistic! 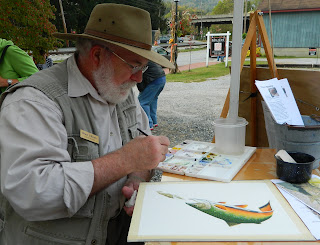 Then we came across a painter, and Johny said "would you be related to a Ravy in FL?" and she said yes, and just then her husband came up and said "John!"...small world...Dr. Ravy used to be a professor Johny had in college! 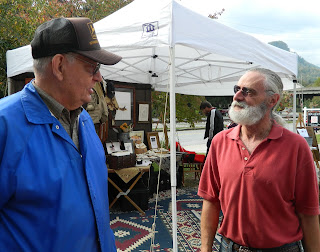 And this is his lovely wife, the painter. 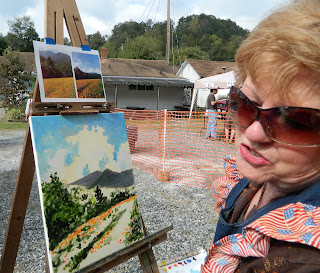 I was fascinated by this artist.  She used to paint canvas and now is painting rocks! 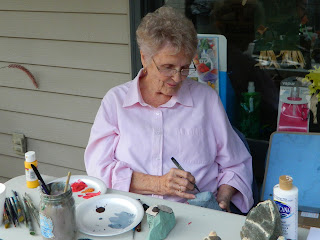 I liked it, garden art! 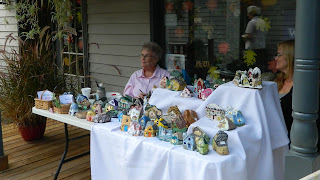 David Ammons is a chair caner, learned the split oak art from his grandfather, and the weaving was self taught.  I really enjoyed watching him work. 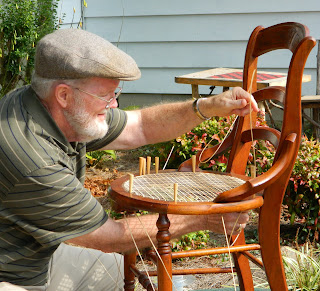 He was working on this piece when we arrived I could see the finished result when we were leaving.  Nice chair! 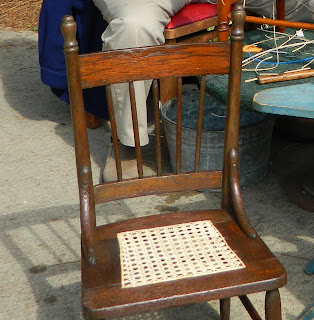 We enjoyed our time at the Color Fest, we even ran into our friend and neighbor Charlie and his wife Andrea!  As we walked to our car, we nibbled on a bag of fresh kettle corn.  Life is good!

Thanks for reading my blog, you are the best f/f/r/s/f's, see you tomorrow,
Lise
Posted by Lise at 6:33 PM

Dillsboro? so are you guys pretty close to Brasstown?
You know we are going to John C Campbell next May for a week!!!

The festival looks like fun. As a visitor, it's always nice when it's not too crowded.

Yes Patti, we are about an hour away! I think meeting in May would be perfect, if we haven't met already prior to that!

Reminded me of Sturbridge Village, MA. Mom and I spent the first day of our honeymoon there...Hugs!

You'll have to tell me more about it dad!