Are You A Scaredy Cat or A Trickster?

I've never been one to enjoy being scared, in fact, it doesn't take much to spook me, and once my adrenalin has kicked in, I am quite skittish and touchy.  That would make me a Scaredy Cat!

Has anyone ever scared you half to death?  I have a funny Halloween story (or not if you were my brother Marc or Bobby) about our dad, who falls into the Trickster category, no doubt about that.  In fact, I believe he was born a trickster; he has lots of stories from way back when!

Dad always made the most of Halloween, with decorations and shenanigans to spook the kids who came trick-or-treating.  Scary music would be playing, ghosts would come flying down the staircase right at the front door, he would cackle mysteriously and pounce from behind objects when you least expected it.  But my most memorable story was when he put a big black spider on a long string and hung it in front of Bobby and Marc's bedroom window shade.  The outside street lamp provided just enough lighting to the window that it made a silhouette of the spider.  My dad took his long string and hid in the boys closet, which was right near the window.  It took some time before they headed for bed and finally started to settle down (they did the usual horseplay and chit chat brothers will do when they share a room).  But our dad waited patiently, until they were ready for sweet dreams to begin.  It was then that he began to slowly inch the string up and down along the curtain rod, making the spider move up and down like on a string of silk, all the while making a little rubbing/scratching sound.  You know how it is when you are fading off to sleep...my brothers both heard something and eventually raised their heads a bit to look around.  This was dad's cue, he started to rattle the spider a little more, inching it further down the window...my brothers began asking each other what it was, and suddenly, there it was, a huge black spider silhouetted in their window!  They were so frightened they raised right off the bed and flew down the stairs!  My dad said they never even touched the ground, just raised from the bed and landed at the foot of the stairs!  This is one of those family stories that will be shared and remembered for many generations!

Speaking of scary, this is Liam in his costume...skeLiamton!  He's had this scary skeleton costume for quite some time, I am sure he is thrilled he finally gets to wear it for the real deal and not just "show and tell". Isn't he cute?  It may be a scary costume, but look at those eyes!  Almost looks like he is scared to scare you!  Sure do miss him... 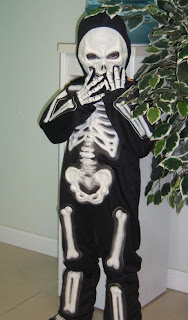 Remember this..."I'm meltttting, melltttting"?  Wizard of Oz was a favorite movie of mine, and when I was young and then when Erin and Jessi were young, it was so scary!  The monkey scene...petrifying!  As I watched these icicles melting today, my mind went directly to the scene of the Wicked Witch of the West melting into nothingness.  Not the same, but this is my way of getting this picture into the blog and sticking with my theme today! 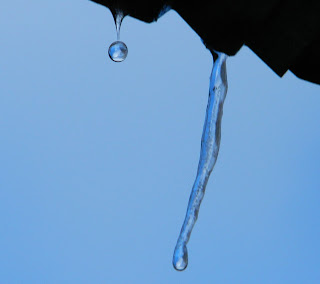 I'll leave you with a favorite Halloween song of mine...The Monster Mash by Bobby Boris Pickett and The Cryptkickers.  I hope you enjoy it as much as I do!

Oh, do you like my jack-o-lantern?  It is actually cut out of black construction paper and I put it in front of the wood burning stove so I could get the flames behind it!  I still have the paper, taped to the front window, but it didn't seem worth using up a perfectly good pumpkin for carving when the only people who would see it were Johny and I...now I wish I had the real thing!

Thanks for reading my blog, you are the best f/f/r/s/f's, see you tomorrow,
Lise
Posted by Lise at 7:14 PM

Thanks for the walk down memory lane! It was such fun!
Hugs!

I hope I got the story right Dad! Hugs back:)