This skillet apple pie is gooey apple deliciousness and simple to make! 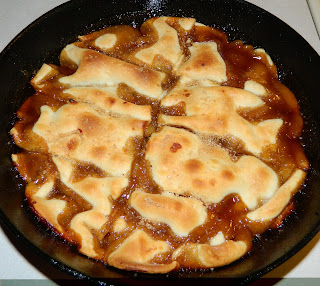 It's been a gray fall day made perfect by filling the cabin with the smell of apple pie:)  I love that smell...buttery sugary cinnamon apple...and it lingers on and on! 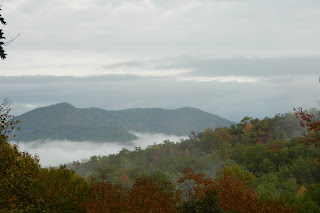 This recipe is from Cook's Illustrated magazine.  I enjoy this magazine because they test different approaches to ingredients, methods and even preferred ingredient brands when providing a recipe; this pretty much assures that the recipe you are going to end up with good eats as Alton Brown would say.

Ingredients:
1/2 cup apple cider
1/3 cup maple syrup (use the real stuff)
2 tbsp lemon juice
2 tsp cornstarch
1/8 tsp ground cinnamon
2 tbsp butter
2 1/2 lbs apples (about 5 cups) - peeled, cored, halved and cut into equal sizes (This is the hardest part of the whole recipe, not because it is difficult, but because it takes time; if you want to keep your apple slices from browning while you slice, put a little lemon in your apple bowl and shake them around in it as you add the slices.  Let me clarify something, it is difficult if you use wild apples like I did, which require a lot of removal of bad spots...what do I mean by wild?  The orchard that we picked these from is a much loved but natural orchard...nature and nature alone is responsible for the fruit, so while they are delicious, they are not very pretty nor are they always perfect inside...I had to use 5 more apples than you see in the picture below before I had enough good slices.) 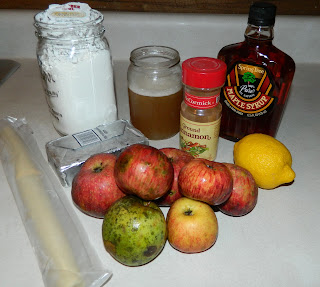 Mix the apple cider, maple syrup, lemon juice, corn starch, and cinnamon in a bowl and set aside. 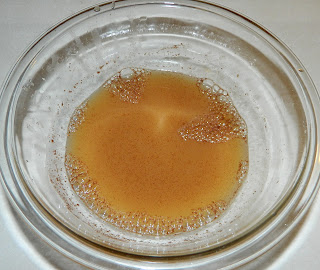 Put the butter in your skillet on medium high heat until it foams.  As the foaming subsides, add your apples and cook until they begin to caramelize; it is important that you don't over stir them, because sitting on the heat with the butter is what causes the apple's sugar to caramelize, so stir only 2 or 3 times (this is really hard for me to do because I am tempted to look to see if they are starting to turn brown yet...patience my dear, patience!) 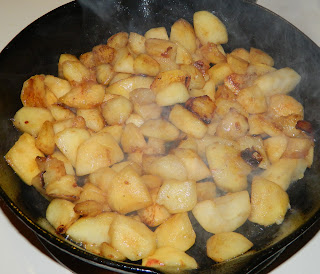 Once the apples have caramelized, remove them from the heat and add the liquid.  Stir gently to combine. 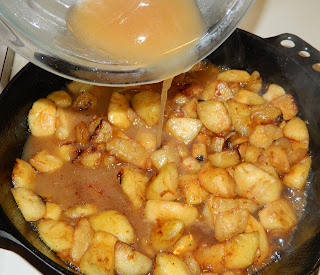 Allow the mixture to cool a bit, then add your crust on top.  I bunch the crust a little (looks a little like a brain right now, wouldn't you agree?) so it will leave space on the edge; if your pan is larger than the size of your pie crust, then you don't need to bunch it.  I like using a bit of a 10" pan because I like a thick bed of apple, but I do then have to bunch the crust.  Using a sharp knife, cut the crust and open up some small spaces between the different pieces and the edge of the pan so the juices can bubble through.  Sprinkle the top with the raw sugar (I forgot to do this at this point so I did it when the pie came out of the oven; this just resulted in the sugar not melting as it would have in the oven). 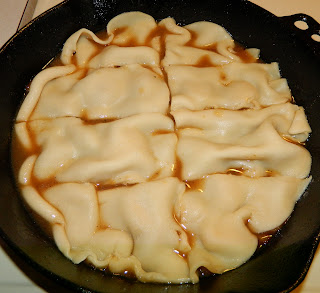 Skillet Apple Pie! This is some real fall weather goodness! 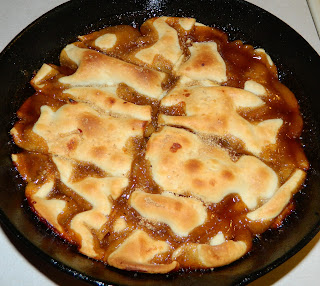 On a different but similar note, I do believe the hummingbirds have headed south for the winter (it is getting cooler for longer periods of time, and the days are obviously shorter).  When I returned earlier this week, at least one was buzzing about crazily searching for food because all but one of the feeders were empty.  I made new sugar water, filled them up, and ever since then, I've not seen wing nor tail of them!  It is time for them to move on south, but I sure will miss them!  This is the first time we have been at the cabin to experience their departure...makes me glad to be here!  Life is good:)

Yeah for you using your cast iron!!!
I only wish I had smell a vision!

Love that cast iron!!! Sure wish I could invent smell a vision...would draw a lot more readers and I'd be a millionaire:)