These iron skillets and bread pan were purchased (cheap) some time ago at thrift stores and flea markets, knowing full well they needed to be restored.  The rectangular one is Lodge, the small one was made in Taiwan (never saw that before) and the larger one is a 5 D 3 made in USA skillet, but with no other markings. 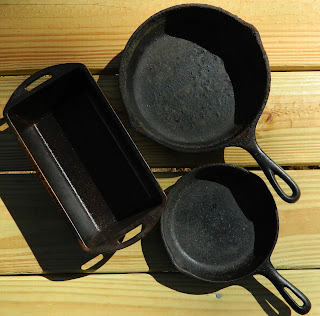 This is the 5 D, in really bad shape. 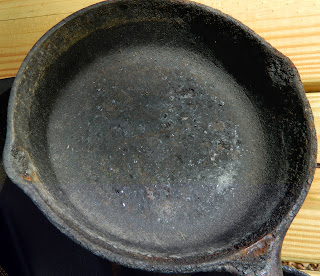 This is the bread pan, and it looks to me like someone painted it to look like it was seasoned.  Really???  Come on, I wouldn't cook in that thing if it was the last thing I had to cook in! 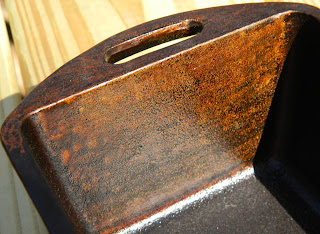 This is the Taiwan pan, the inside looks pretty good, but the outside is nasty. So here we go, ready to restore.  We've been collecting stuff we can't burn in the cabin in one of our outside fire pits (we have a bigger one in the valley).  I've been waiting for the perfect day to begin restoring my cast iron, and today was the day...woo hoo!  This is all the cast iron on the top of the pit pile, waiting for flame...the first step in removing all the gook that has built up over the years (or been applied, as in the case of my bread pan) using very hot fire...this is the most effective method, though it is time consuming.  You have to build the fire, sustain the heat, keep the cast iron covered with coals, and monitor the entire process throughout.  It took me 3 1/2 hours today...but I love fire, and our fire pit, and cast iron, so not a bad trade of time for enjoyment! 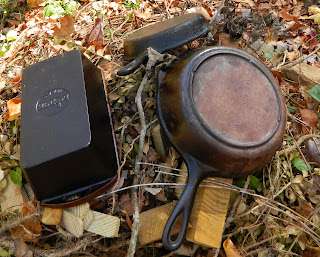 And the flame begins! 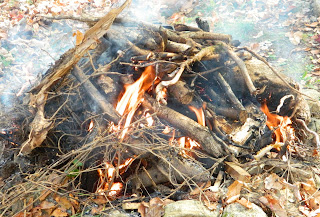 You want to be sure the cast iron gets enveloped into the fire, so the heat surrounds it. 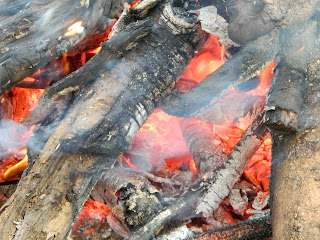 You want hot coals below, fire in the middle and heat producing logs on top (if you look closely you can see he pan in he middle of the picture). 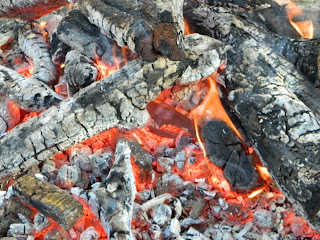 As the fire develops and continues to heat, be sure to keep hot coals and flame around the cast iron.  A good flaming fire requires air, so as you move the cast iron, coals and logs around in order to keep the cast iron submersed so to speak, be sure you leave some air holes to keep the flames burning and coals glowing.  It takes ongoing attention.  But it is a fun process, especially if you like fire, and will result in cast iron that is ready for the next step! 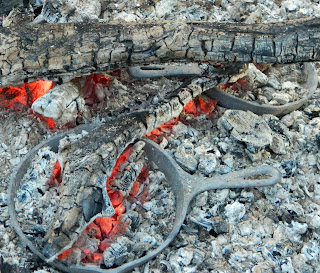 DO NOT remove the cast iron until it is completely cooled, meaning until the next day.  And DO NOT put water on the cast iron. 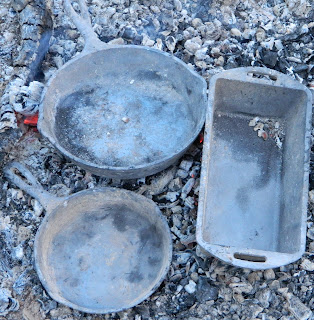 These pans look pretty good!  It's a little hard to tell for sure until they are cool and can be handled, but they look smooth and clean, except for some burn marks, which will be scrubbed away.  The next step will be to scrub the cast iron to remove any remaining rust and soot, and then to season.  This will be described in a soon to come blog, as my demonstration items are still cooling!

By the way, today was incredibly beautiful, and we opened up the windows and doors to air the cabin out for what may be the last time before spring.  Funny how, when it's been cool for several days, requiring a heating fire in the morning and evening, and then one day the temperature rises to 67 degrees and the sun is shining, it feels warm!  I had shorts and a t-shirt on...well, I was tending a fire, but it still was beautiful!

Come back to hear about the next steps to restoring your cast iron!

Thanks for reading my blog, you are the best f/f/r/s/f's, see you tomorrow,
Lise
Posted by Lise at 8:16 PM

Lots of work, but worth it. Reminded when when as a scout master we would prepare a "bean hole bake" to impress the parents. This was a process similar to yours today, except that we kept the bean pot in a stone lined hole. Results were delicious! Hugs!

Great info Lise. I have a big dutch oven with feet I need to clean just waiting for the cold weather to get here first.

Bean hole bake sounds awesome dad, you'll have to share that recipe and process with me!

Christine, hopefully your weather will cool down soon:)