We began our garden mulching project today...didn't get as much done as we had hoped, but we made good progress.  We weeded everything last Monday and waited until things dried out a bit before collecting all the wood (from when we felled the big trees to allow more sun into the garden).  This is the end result of today's work, you can see the mulch along the fence, and you can also see that behind the fence all the branches are gone. 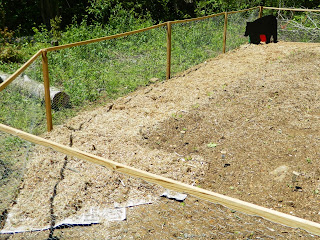 This is the before shot... 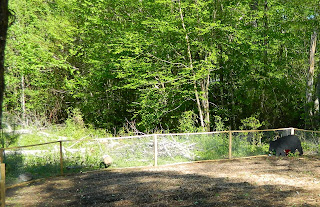 We began by collecting all the branches that were no bigger than 2 inches around (what you see below is just the beginning), and put them into a pile. The larger branches were loaded into the cart hitched to bear (our ATV) to bring back to the cabin to cut into firewood. 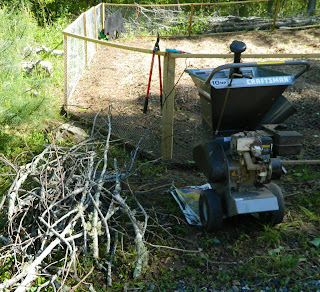 The pile of wood you see in all those weeds is the one we focused on today; I've been weed eating as get the wood out of the way, so eventually, there will be a nice open field next to the garden. 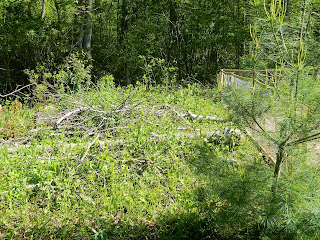 I laid newspaper down first (this creates a thicker barrier to keep the weeds from growing but allows air through for the veggies), then dropped the mulch by buckets onto the paper, about 3 or 4 inches thick.  We are doing this around the entire perimeter of the garden, and will also mulch (without newspaper) in between the planted rows. 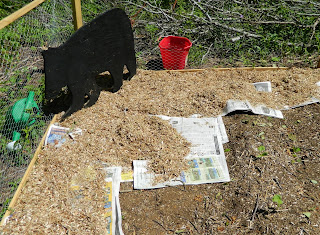 This is our mulcher, super machine.  It is so powerful as it sucks the branches through the machine that you have to be cautious of unwieldy branches...I got my fingers whacked a few times and once in the head, but they were minor incidents and good reminders to be attentive. 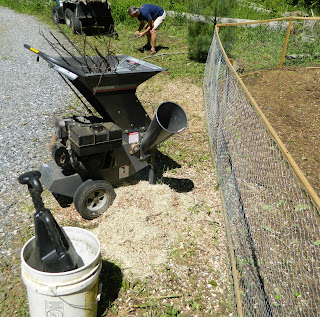 We thought we would finish this project today, but it's taking much longer than we thought.  We'll be back at it again tomorrow! 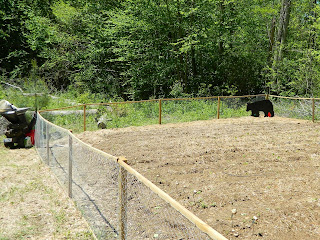 I do have to say that all the rain we've had is causing trouble for our small sprouts, too much water and not enough sun.  We may end up having to sow more seeds, but we're OK with that (not much else we can do). But it has been sunny for 24 hours now, with sun expected through tomorrow, so perhaps things will dry out enough for everything to perk up.

Thanks for reading my blog, you are the best f/f/r/s/f's, see you tomorrow,
Lise
Posted by Lise at 4:26 PM

We slept at a rest area last night from 10 till 3 AM. The guy with the CCW had his gun right by us. We slept like babies until 3 and decided since we were up, we'd head on down the road. We got home at 10:30 AM!!

No blogging tonight, and probably not tomorrow with the craft show.

All that work makes me extremely tired, but I know you will have some good vegetables before long.
Your photos are great.

LOL Patti, I promise to beware! Sounds like you had a good trip home, hope the show was fun! Make sure you check my Kindred Spirits post...it's all about us:)

Thanks Glenda, it makes me tired too, LOL! Can't wait for the fruits of our labor to start to produce:)

Like the EverReady Bunny, we're still going! Hugs back dad:)

So much work! How impressive! Is that a bear silhouette...too cute. I look forward to seeing some of the benefits of your labors!

I've gotten behind with a lot of my blogging and am trying to get caught up now. Bear with me! :-) (Oh, a PUN!)

Ha ha, still working too Marie! You are so punny:)