The Hunt For Morels

There is nothing that makes Mountain Man happier (well, almost nothing) than hunting and harvesting wild morel mushrooms.  Today was an especially significant day for him because it is the first time he has hunted morels on his own and he experienced the intense pleasure of discovering his very first morel in "his own" morel hunting ground (meaning not with another person who has a favorite hunting spot where they have found morels previously and have taken Johny along on one of their hunting trips).  You see, morels are highly desired by mushroom lovers; there is an unspoken agreement amongst them that if a hunter shares where they have discovered them, that area remains "inaccessible unless invited by the founder" so to speak. 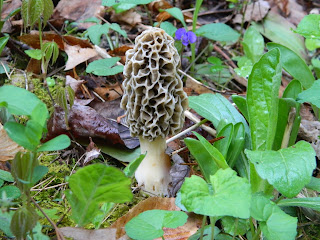 Morel season is short, with the delicacies fruiting for only 6 weeks or so, depending on the weather.  Johny has been out hunting them on many an occasion since Spring has sprung, but has yet to "found his own patch".  Early this morning, we decided to head out to an area with very old apple trees (a favored growing spot for the little delicacies) that he had hunted on his own last week, but had discovered no morels at that time.  We hiked and hunted for quite some time without success and disappointed, decided to head out.  We then came across an unused road and agreed to go exploring to see if there were any old apple trees in that area.  It was a beautiful location, and sure enough, a couple ancient apple trees graced the landscape.  Johny raced over to the first big 'ol tree with the excitement of a child, searching the ground and within seconds I heard "Morel!".  The grin on his face was priceless!  I slowly approached, watching every step to be sure not to crush any, and together we harvested several (it's a first for me too, I've never seen them in the ground before!). 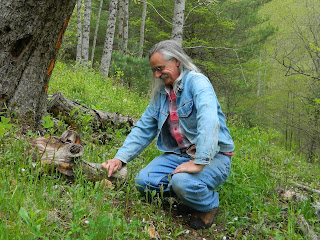 Sorry, this picture is a little blurry but it was the first and prettiest morel we found. 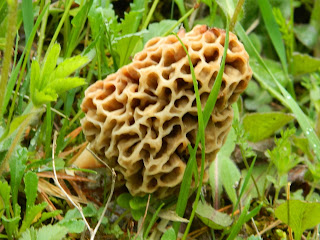 They are a relatively sturdy mushroom and easy to harvest.  You simply slice them at the point the stem meets the ground, making sure to leave the mycelium intact so it will grow again next year. 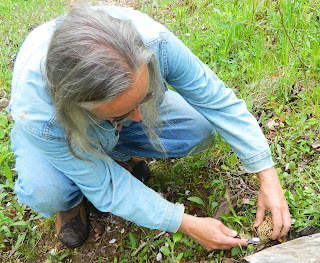 Ha ha, he looks so proud! 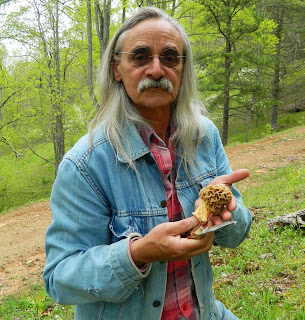 They are interesting mushrooms that look a little like a brain and are difficult to see at first, but once you have seen one it seems easier to spot others. 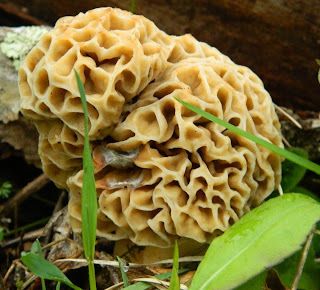 The type we found is called common morel... 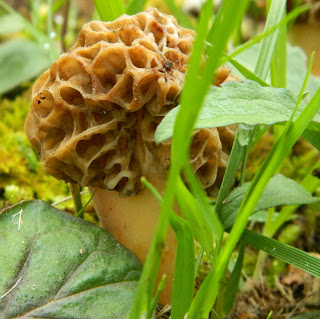 ...even though this one looks a little different in color, it is also a common morel. 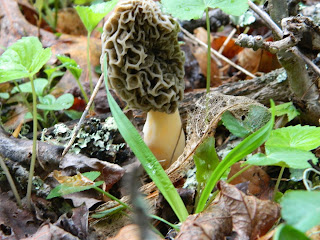 This was our final harvest, though we left a few very small ones in place and will go back next week with the hope that they will have grown larger and others will have fruited. 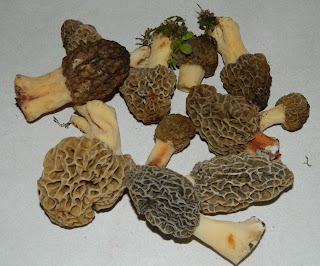 This evening, we will cut these delicious meaty mushrooms in half (they are interestingly hollow inside, unlike most mushrooms) and saute them in a little butter and a sprinkle of salt, pepper & parsley.  It's going to be good!

Thanks for reading my blog, you are the best f/f/r/s/f's, see you tomorrow,
Lise
Posted by Lise at 4:40 PM

That's a new one on me.. Never heard of them, probably seen them before but didn't know what kind they were.. Hope you are having a nice weekend inspite of the rain.. xo

Ah, Susie, they are absolutely delicious! It is quite dreary this weekend, isn't it! I hope you are staying dry:)

"Happy trails/morels to you"!
Hugs!

Happy trails indeed, we found 2 more not far from the cabin! Hugs back dad!